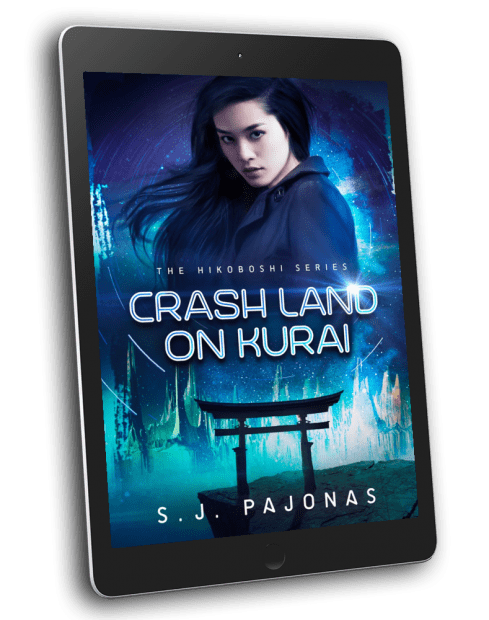 Surviving the crash landing on Kurai is only the beginning...

Now Yumi must brave the wilds of an unknown moon until her rescue mission shows up. If it ever does.

About Crash Land on Kurai...

He’s dangerous, and she’s desperate for his help. Will he be her savior or the cause of her enslavement?
Disgraced journalist Yumi Minamoto is no stranger to risk. She’s been handed a second chance to save her name back home by documenting a peaceful mission to the Hikoboshi System, and she’s determined to do just that. But when her ship is attacked, she’s separated from her brother, and her life pod crash lands on a dying moon. The mission is torn to pieces, and she finds herself in the middle of a deadly civil war.
Now Yumi must navigate the unfamiliar terrain, face off against murderous androids, and grapple with a paranoid leader, struggling to stay alive amidst a culture she doesn’t understand. Even more threatening, Yumi finds herself attracted to Rin and his quiet strength and soon discovers his knowledge of the native’s customs could be the key to her survival. As Yumi’s search for her brother intensifies, can she find the courage to trust Rin — and the truth she’s desperately seeking — before she’s destroyed by the power struggle between love and war?
Crash Land on Kurai is the first book in the fast-paced Hikoboshi Space Opera Romance Series.
If you like high-tech futures, intergalactic battles, and heart-pounding romance, then you’ll love S. J. Pajonas’s thrilling sci-fi adventure romance.
Note: THIS SERIES MUST BE READ IN ORDER. It is a true series and plot elements carry through every book, from beginning to end. You will miss too much by reading this series out of order or skipping around. This series contains a slow-burn romance, profanity, and sexual situations.
Genre: Science Fiction Romance / Science Fiction Action Adventure / Space Opera
Series: The Hikoboshi Series
Rating: Rated R for language (profanity), sexual situations, and violence.
Publishing Date: July 18, 2017 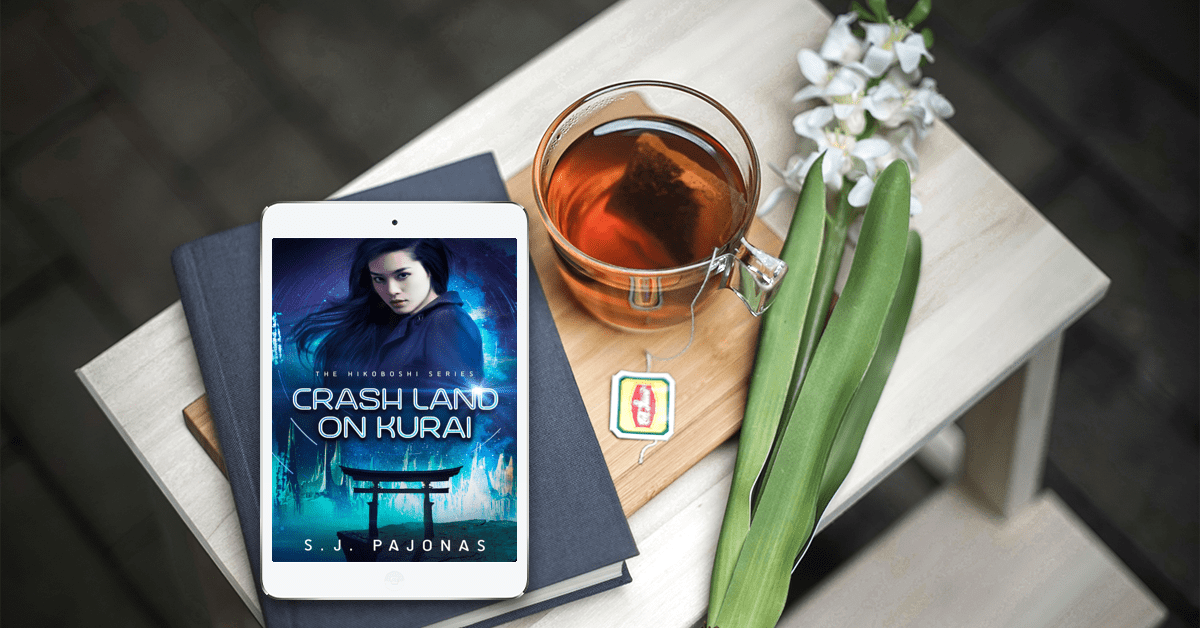 Kazuo and Gen sit and divide up the supplies, turning out the medkits and fashioning them into backpacks with some of the chair straps we stripped from the life pod. Ryoko and I sit around the campfire, chewing on smoked protein strips, munching on freeze dried berries, and drinking water.

“Will you be okay traveling alone with him?” I whisper to her.

She waves me off. “Psh, he’s fine. More bark than bite. It’s just…” She sighs and folds her arms over her knees while staring into the fire. “Will you tell them, when this is over, that I wanted to follow procedure?”

My lips quirk as I remember her interview. Ryoko always did play by the rules, and she knew them backwards and forwards. No need to learn them yourself if she’s on your team.

I knock my elbow into her. “Of course. If I’m still alive, I’ll be sure to tell them you were the pinnacle of honor and forthrightness.”

She rolls her eyes at me. “You’re a walking thesaurus, you know that?”

“I believe that’s my job.” I clear my throat and put on my best newscaster voice. “Today, on a foreign moon off the third planet in the Altair system, the Murasaki encountered certain doom at the hands of an inimitable foe. After missiles were fired and damaged the ship without provocation, the crew escaped to the moon’s surface to be met with incurable injuries, starvation, and cannibalism.”

“Ew!” She chucks a freeze-dried berry at me.

“I made that last part up, but you know, stay safe.”

“What I particularly enjoyed was the depiction of how environmental pressures affect a culture, so the colony that only a few hundred years ago was identical with the same values as its Earth equivalent from whence it came, now has morphed into something quite different. The runaway capitalism, where the majority population are born indebted and have to work continually to keep alive, is both shocking and plausible, given the ongoing warfare between the factions… All in all, this is a thoroughly engrossing adventure and a strong start to the series that I will be definitely following in future. Highly recommended.” – S. J. Higbee, Brainfluff

“You will fly through this book! Not only was the character related to the world building is a great way… the world building itself is quite fascinating. A corporateocracy is something that I already have been exploring myself so to read another author’s POV was super exciting! This is a wonderful cross between an urban fantasy and a science fiction story based on unexpected Japanese culture. The political society and technological advances will entrance you are Yumi struggles to make sense of her role in such a world. Crash Land on Kurai is a great start to a new series, I highly suggest reading it!” – Dani, Perspective of a Reader

“Wow this book was so good! It hooked me from the start and it kept my attention throughout the whole book. It's fast paced and there's so much happening and going on. Every time we learned something new I was ready with even more questions. I wanted to know who these people were, what happened here, how their society worked and more. And when I finished the book I wished book 2 was already here as that ending makes me so curious about what will happen next! … I liked the mix of Japanese culture with a futuristic/ sci-fi world, it's so well done.” – Lola's Reviews

“My desire to read more books by the author just goes to show how powerful a read Crash Land on Kurai is. From the very first page, I was pulled into the story, unable to put it down… As powerful as the world building, storytelling, and storyline were, the characters were easily my favourite. The world building blew me away with the unique take on space (I have never read anything in this genre where the Japanese culture is so prominent), the storytelling gripped me through the ease at which it leaves us invested in the story, and the storyline threatened to blow my brain from the many wonderful interconnected elements (I know so much and yet, at the same time, I know so little). The characters, however, buried themselves deep in my heart… Honestly, this was a brilliant read. There were so many interesting elements in this story and I cannot wait to see where the series heads from here. It is certainly a series I'll be keeping an eye on! ” – Siobhan Caughey, Bibliophile Ramblings

“The action in this book is intense, and the alien world that Yumi and her friends end up on dishes out quite a few surprises. I found myself happily immersed in the unique society that Pajonas created.” – Nicole, Feed Your Fiction Addiction

“This was the first book in what appears to be a series, and based on this story I can't predict what will happen next. My only suggestion is to read the series and find out, which is what I plan on doing. I have read SO many dystopian-esqe tales over the last few years and I can say that I have honestly never encountered anything like this.” – Katherine Pascal, Smada's Book Smack