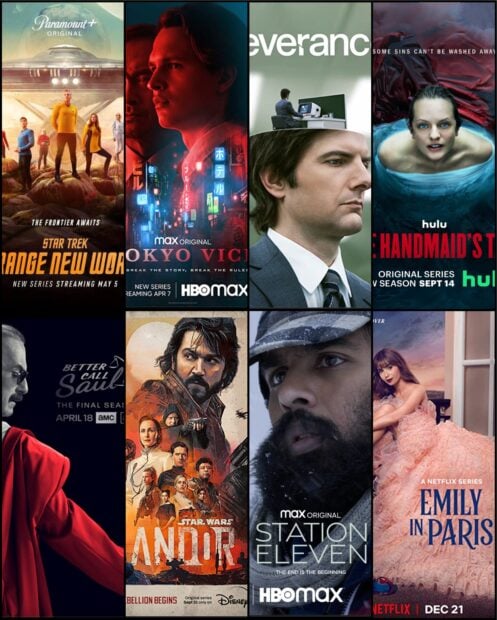 Okay, I need to face facts here. I watch a lot of TV and movies, and I'm not ashamed of that. Lol. Before I wanted to write books, I wanted to write screenplays. It's been a dream of mine for ages, to write something for the screen. This may be why a lot of people remark on my books that they can see them as movies? I don't know, but I would hope my words inspire cinematic images in your brain.

But keeping up with my TV watching habit is tough on the blog, so I'm going to list out everything I watched this year and I will make a few comments on the things I loved the most. It's my intention to do this at the end of every month next year. We'll see if I can stick to it.

What I Watched This Year

Emily in Paris, Seasons 1 and 2 rewatch

No Time To Die

For All Mankind, Season 3

Never Have I Ever…, Season 3

Shows I Loved the Most

A few of these shows really stand out for me.

Writer: Darren StarStars: Lily Collins, Philippine Leroy-Beaulieu, Ashley ParkSummary: Emily, an ambitious twenty-something marketing executive from Chicago, unexpectedly lands her dream job in Paris when her company acquires a French luxury marketing company - and she is tasked with revamping their social media strategy. Emily's new life in Paris is filled with intoxicating adventures and surprising challenges as she juggles winning over her work colleagues, making friends, and navigating new romances.

Emily in Paris
I rewatched this and then devoured the last season in two days. This show reminds me of an old-time comforting favorite, Sex and the City. I think I could rewatch it again. (Netflix)

Station Eleven
Hauntingly beautiful and well-done. This one is sticking with me. I usually hate timelines that jump around, but this one was plotted nicely. (HBO MAX)

Andor
Totally fantastic. This show had so much to offer with no Jedis, no Force, and no lightsabers. Diego Luna was so engaging and the politics and edge-of-my-seat action had me captured. Can't wait for another season! (Disney+)

Better Call Saul
This was one of those shows where you're not sure if you should be rooting for protagonist, but you do it anyway because they're so charismatic. I love the way this series ended. It was exactly the way it should be. (Netflix and Amazon Video)

Summary: A religion-based autocracy has taken over most of the United States, renaming the country Gilead. In this country women are second-class citizens. Anyone trying to escape is punished. One such person is June, who is captured while trying to escape with her husband and child and is sentenced to be a handmaid, bearing children for childless government officials. As a handmaid, June is renamed Offred. This is her story. Written by grantss

Handmaid's Tale
This show continues to deliver, every damned, gut-wrenching, horrifying season. This last one was no joke. I'm still thinking about the parting scene and wondering what will happen in the next and final season. (Hulu)

Severance
I went into this knowing the basic concept and yet… yet… it didn't ruin anything. It was so mysterious and different. The sets and lighting and directing and acting, ALL of it were top-notch. The final episode of the season blew me away. It's worth it to sit through this one if you are on the fence about it. (Apple TV+)

Tokyo Vice
Never before has a show so vividly captured the foreigner in Japan who is actually trying genuinely to be a part of the Japanese culture. I kept laughing because I was saying “That's true” and “Yeah, that happens” and “God, that's accurate” over and and over. My husband got an earful from me after every episode. So good, but made me want to be back in Japan BADLY. (HBO MAX)

Star Trek: Strange New Worlds
Everything I've been asking for from Star Trek for the last 15 years but haven't gotten in any of the other shows. A cool ship. A fox of a captain. A fun crew. And missions every episode that keep me watching like TNG did. I can't wait for this one to come back! (Paramount+)