The Astrology of Myra’s Big Mistake 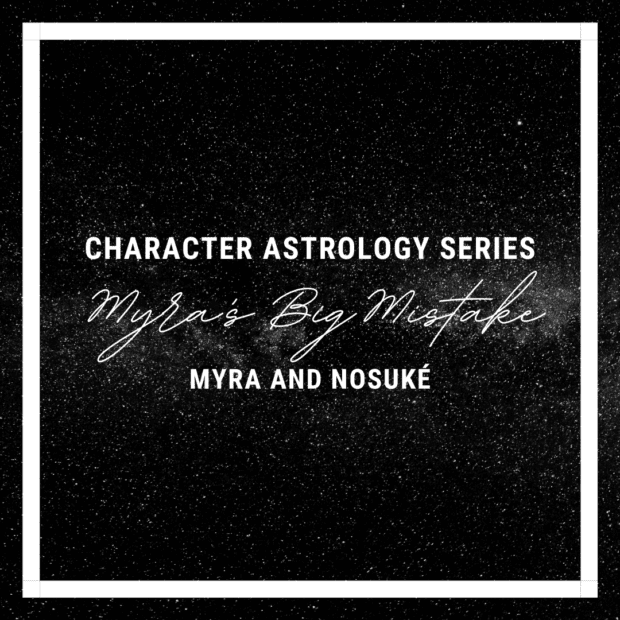 My love of astrology seems to get into delicious ruts. Water and Earth. This is a combination that I just couldn't let go of when I decided to write Myra's Big Mistake. In the first book of the Kimura Sisters Series, the two main characters were also this sun sign pair, but Suri was the Taurus and Erik was the Pisces. This time I have reversed the pairing and made Myra the Pisces and Nosuké another Earth sign, the Virgo.

When Myra's friends think of her, a few personality quirks come to mind right away. She's creative and imaginative, but she's never on time for anything. She's selfless and always puts her friends and family first, even to the detriment of her sleep and the state of her kitchen. When her best friend Ruby insists on baking cookies, right in the middle of Myra's nap, Myra pulls herself together to accommodate her. Pisces are well known for their adaptive, go-with-the-flow attitudes and Myra has this in spades. When plans change, she shifts without complaint, even when she's waylaid in the middle of the night by overzealous men running an errand for their boss.

Myra's animal pair is a skunk named Mochi. He won her tender heart with his outcast life. She immediately fell for his frank and deferential personality, and they've been quite the team ever since. In fact, it was Mochi who convinced Myra of Nosuké's feelings for her. Mochi's strong observational skills caught the lingering looks right off the bat.

But, of course, Myra didn't believe it at first, and it took a lot of convincing for her to accept Nosuké romantic advancements. In the past, Myra had taken too many comments from previous boyfriends to heart and found herself wounded by love. She's not the most stunning of her sisters with her wild hair and full body, and it's always bothered her. Past lovers had hidden their relationships with her from the public, leading her to feel lonely and rejected. Learning to accept love again is difficult, but Nosuké is the right kind of guy to take on the challenge.

Unfortunately, Nosuké has a bit of a bad reputation, being the son of Noburo Maeda, one of the leading entrepreneurs of Yamato. He's not only one of the wealthiest men on the planet and owns several casinos, but he's also descended from a major yakuza crime family from Earth. Nosuké, though, has a lot of chill and caring Virgo vibes that make him a great suitor. He conscientious, humble, and hard-working. And even though he could literally buy everything on the planet, he's modest and kind.

When he decides he's really ready to woo Myra, he uses his Virgo abilities to the fullest to persuade her to date him. With increased diligence, he sets the stage for multiple run-ins with Myra, both at her home and workplace, until she can't say no to a beautiful meal at one of the most exclusive restaurants in town. From there onward, he uses his logical nature to keep her by his side and in his bed.

Ultimately, these two are attracted to each other for good reason. Virgo provides organization and meticulousness to the relationship. Pisces helps Virgo to take a step back, rest, and let the situation be. They each have something that the other lacks, so together, they make a great pair. Maybe in the future, Virgo's need for perfection will make Pisces's a little frustrated, just like Pisces's fluidity may clash with Virgo's need for structure. But Myra and Nosuké will learn how to make it work.

Don't forget to pre-order this awesome anthology today! 10% of pre-order and first month's sales goes to Hero Dogs, a charity that places service dogs with veterans, and y'all know how much I love dogs!