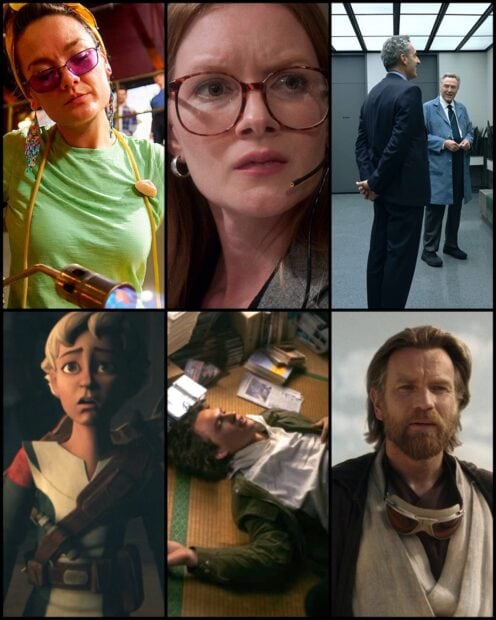 I'm now limiting my TV and Book Chats to 6 items per post, and there was more TV than this during my summer break, so I'll write up another post soon.

I never had the chance to watch any of the animated Star Wars shows, so I'm hoping to get caught up with them all at some point. I started with Bad Batch, and it was fun to watch. After I got used to the animation style, I found it really enjoyable. I especially loved all the cameos from different characters throughout the Star Wars universe.

I was so excited for Obi-Wan Kenobi and then it just fell flat for me. I wanted to love it, I really did. But ultimately, I feel that the Disney execs just want to destroy all of our Star Wars heroes for DRAMA. And there were so many timeline inconsistencies that I caught, it was hard for me to accept the storyline. We watched the whole season, but it just didn't do it for me. Bummer.

Tokyo Vice was really, really good. Like, I couldn't stop thinking about it ALL THE TIME, even after we finished it and moved on to another show. The protagonist, Jake Adelstein, is actually a Japanese news blogger and pretty “famous” foreigner in Japan. I used to read his stuff online in the late 2000s. Everything about this show felt authentic, from his time in Tokyo, to the way he was treated as a foreigner, to the Tokyo crime underground. Even all the little details were perfect. I was amazed that someone greenlit this show because it has a lot of Japanese in it, authentic Japanese that Westerners aren't used to. Gotta say that it made me want to go back to Japan SO BAD. This is the Japan I know and love. Sigh. If you like my books and the Japanese that I include in them, you will love this show. WATCH IT NOW.

Season 3 of For All Mankind was PHENOMENAL. So so good. I loved all the twists and turns the narrative took along the way to Mars. And the ending? Wow. They left us with a lot to think about. I really wonder what's going to happen next here. This is some of the best sci-fi on TV right now. Strong women, strong stories. I expect nothing less from Ronald D. Moore. He really is a fantastic writer. If you're hesitant to subscribe to Apple TV+, do it for just one month and you can watch this, Ted Lasso, and Severance…

Severance. Just wow. There's a damned good reason why this has such a high IMDB rating. I had an inkling of what to expect when we decided to watch this show and my husband knew nothing. NOTHING. He's not on social media so he didn't see people talking about it like I did. I won't explain the concept behind this one because it's better if you experience it episode by episode. The scenes on the “severed floor” were so tense, and I can't really pinpoint why. Was it the unnatural lighting? (Seriously, it looks like the space station and inside the monolith in 2001: A Space Odyssey. Damned creepy.) The complete uselessness of the work that happened there? The mystery of why they were there? I don't know. I only know that after the first two episodes I wanted to watch more and figure out what was going on. Then the last show of the season freaking BLEW ME AWAY. I'm still thinking about it. I can't wait to watch more of this one. I hope the next season will be out soon.

Season 3 of Blown Away was just as good as the previous seasons. I love that this is both about competition and artistry, plus as a viewer, I get to learn about glass blowing too. Glass blowing is something I've always been interested in, but I hate being THAT HOT so it's not a hobby for me. This season kept me engaged from beginning to end, and I was happy with the outcome. I will definitely watch another season when it airs. I hope they will continue this one!

And that's it for now. I still have plenty more TV to talk about it, but it'll have to come in another TV Chat sometime soon.