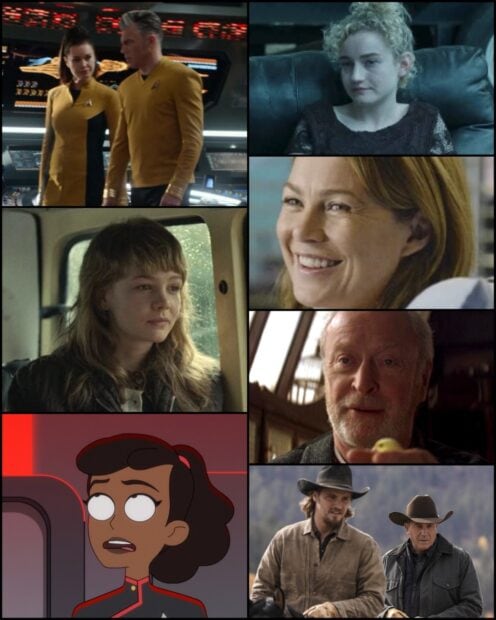 There's been a lot of TV around here! Let's dive into the things we've watched in the last few months.

People, I watched all 18 seasons of Grey's Anatomy, all in a row, from mid-February to the end of May. It was quite the ride. There were several points where I could see someone giving up on the show. Especially when beloved characters died or left. But overall, I think it was a solid show all the way through. Maybe I'm lucky because I was able to sit down and watch it, day after day, so I never lost the threads of the multiple storylines? Hard to say. All I know is that I learned a lot about human anatomy and storytelling from this show! There were several medical plot lines that I thought, “What? That can't be true!” and then I googled and found out I was wrong. Lol. Like uterus transplants! Did you know that's a thing? I didn't! Anyway, for storytelling I learned that there can be ensemble casts where you sort-of low-key dislike everyone, but still love the whole thing together. And that you CAN have plot points that happened in season 1 show up again in season 18 and people will get it. Brilliant. I highly recommend this show if you haven't seen it.

If you haven't watched Yellowstone, you are missing out. This is also some great storytelling, full of one-liners and gravelly voiced sage advice delivered with a tip of a cowboy hat and a wink as Kevin Costner rides off into the sunset. Yes, it is a lot of cowboy stuff. Holy crap, I had no idea there was such a subculture here in the US. It seems so… out-of-touch, but I know it can't be. Maybe this is how outsiders see us? I'm not sure. Anyway, the twists and turns of this show will keep you on your toes. And the beauty of ranches, horses, and Montana will keep your eyes glued to the screen.

We finally finished Ozark. I'm not sure what to say about this one. The ending is ambiguous, much like how the Sopranos ended. And I understand why they ended it the way they did, but … come on. The Byrds deserved a lot more than they got! Overall, it was a really good show and worth watching, even if I'm meh about the ending. Some great performances here from Jason Bateman, Laura Linney, and Julia Garner.

My husband said to me one night, “Hey, I bought this Christopher Nolan movie and I was thinking we should watch it.” I had never heard of The Prestige, but I LOVE Christopher Nolan and pretty much everything he's done, so I said why not? This is a great movie, people. My husband and I talked about it for days after seeing it. There are a lot of twists and turns and little mysteries that get revealed along the way. Those mysteries make you consider earlier facts as suspect, and it just goes on and on. Don't be fooled by the costumes. It's not really a period piece. And how can you say no to David Bowie as Nicola Tesla? You can't. Watch this movie and tell me why Alfred doesn't remember the knot he used to bind Julia's hands or why his wife doesn't believe he loves her all the time. Go on. (It's so good, I want to watch it again.)

The book this movie is based on, Never Let Me Go by Kazuo Ishiguro, has always stuck with me, and kind of haunted me for years. It's a beautiful book and I highly recommend it. The movie is a little slow, and without the context of things in the book, it's hard to know what's going on. But hell, let's face it, the book never really explained everything either. Is it a dystopian? Hard to tell with the few clues we get. Is this post-apocalyptic? Like after a war? I tend to think so, although this too is left up to the reader. Anyway, I was making a list of movies I had always wanted to see but didn't because work-adulthood-parenthood-etc. and this was one of them. I watched it while finishing up the blanket I was working on.

We moved from Ozark to Star Trek: Strange New Worlds and boy am I happy we did. What a great show! I'm really loving it so far. There's a lot of Star Trek nostalgia, but newer with its own spin. It's finally the Star Trek I WANT to watch. I haven't felt this way since watching Voyager. I totally love Anson Mount as Captain Pike. His hair is as epic as his acting. And Christian Chong as La'an Noonien-Singh, who has really strong Expanse Drummer vibes. The whole cast is pretty great, but those two really stand out for me. I'm looking forward to more of these in the future!

During my lunch breaks, I have been watching Star Trek: Below Decks, and I'm totally loving it. It's a fun, quirky, nerdy, hilarious take on the lower decks officers on a middling Federation starship. This is not the Enterprise. These are people who do Second Contact, not First Contact. Lol. I found the first season totally addictive and funny, and I'm looking forward to watching the second season now.

PS) For all the Trekkies out there, be sure to watch the bonus Ready Room episodes that are available in the Paramount+ app. I just adore Wil Wheaton and his enthusiasm for all things Star Trek. Watching him interview people and geek out about Star Trek stuff just makes my heart happy.

Not mentioned in this post: Seasons 10 and 11 of Call the Midwife. I watched all of Season 10 and then found Season 11 on my PBS app! Score! But I only got 3 episodes into Season 11 before they pulled the plug and took them down from the app. Boo. I'll mention it again when I finally finish the season. I'm sure it'll be on Netflix eventually.