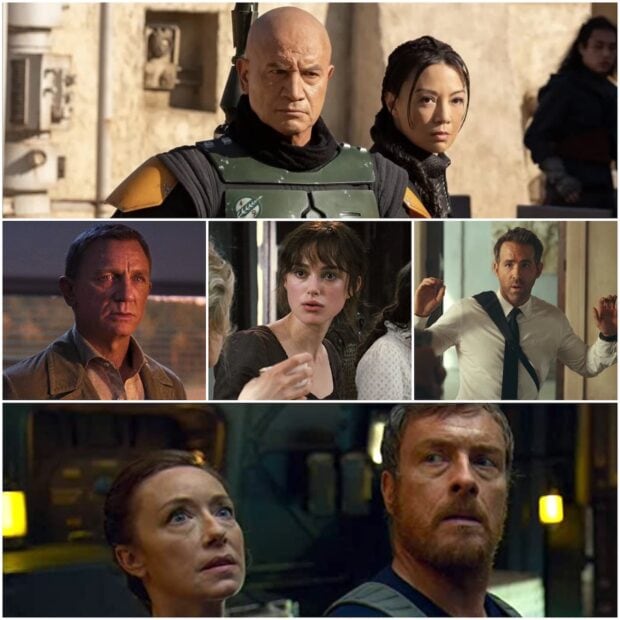 Once again, a lot of TV around here. I seem to be coming back to my roots of TV and movies to study for good stories and story structure (I was a screenwriter before I was a novelist). There's more TV than this, but I'm currently watching some longer shows, so those will have to come later.

Writer: Jon FavreauStars: Temuera Morrison, Ming-Na Wen, Frank TriggSummary: The legendary bounty hunter Boba Fett navigates the underworld of the galaxy with mercenary Fennec Shand when they return to the sands of Tatooine to stake their claim on the territory formerly ruled by the deceased crime lord Jabba the Hutt.

All in all, I'm lukewarm about this show. All of the long flashbacks were kind of annoying, but then I love getting more insight into Star Wars canon. I thought the biker gang chase was really cheesy, but I still love the mods and their way of life. And, of course, I love Fennec and Mando, even if Boba Fett himself is kind of boring.

Director: Cary Joji FukunagaWriter: Neal Purvis, Robert Wade, Cary Joji FukunagaStars: Daniel Craig, Ana de Armas, Rami MalekSummary: Bond has left active service and is enjoying a tranquil life in Jamaica. His peace is short-lived when his old friend Felix Leiter from the CIA turns up asking for help. The mission to rescue a kidnapped scientist turns out to be far more treacherous than expected, leading Bond onto the trail of a mysterious villain armed with dangerous new technology. —Universal Pictures

This might be my favorite of all the recent Bond movies. I get the feeling that the writers and producers finally realized that women watch these movies and that we not only love a romance but we also love competent, kick-ass heroines who are genuine and funny… And not just 007’s object of desire but admiration. I loved Paloma and Madeline and the new 007, Nomi. I wonder what they’ll do with the franchise next. I'm looking forward to it if they keep going in this direction.

I've seen this one before, but I wanted to watch it again, as it's my favorite adaptation of the book (Sorry, Colin). I love everything about this, the costumes, the casting, the locations… All of it. I watched while I was riding the Peloton and it was a good distraction from my legs burning.

Director: Rawson Marshall ThurberWriter: Rawson Marshall ThurberStars: Dwayne Johnson, Ryan Reynolds, Gal GadotSummary: When an Interpol-issued Red Notice the highest level warrant to hunt and capture the world's most wanted goes out, the FBI's top profiler John Hartley (Dwayne Johnson) is on the case. His global pursuit finds him smack dab in the middle of a daring heist where he's forced to partner with the world's greatest art thief Nolan Booth (Ryan Reynolds) in order to catch the world's most wanted art thief, "The Bishop" (Gal Gadot). The high-flying adventure that ensues takes the trio around the world, across the dance floor, trapped in a secluded prison, into the jungle and, worst of all for them, constantly into each other's company. —Netflix

Red Notice… it stuck at the top of Netflix for weeks, and I should have checked the IMDB rating first before watching. What a dud. It fell flat in so many respects. My husband and I just kept looking at each other and wondering WHY it had done so well. I don't know if it was TRYING to be campy and missed? I rolled my eyes through most of it, laughed at a few Ryan jokes, and then groaned at the double cross. My 11-year-old loved this one. That says a lot.

Writer: Irwin Allen, Matt Sazama, Burk SharplessStars: Molly Parker, Toby Stephens, Maxwell JenkinsSummary: Set 30 years in the future, colonization in space is now a reality, and the Robinson family is among those tested and selected to make a new life for themselves in a better world. But when the new colonists find themselves abruptly torn off course en route to their new home they must forge new alliances and work together to survive in a dangerous alien environment, light-years from their original destination. Stranded along with the Robinsons are two outsiders who find themselves thrown together by circumstance and a mutual knack for deception. The charismatic Dr. Smith is a master manipulator with an inscrutable end game. And the roguish, but charming Don West is a highly-skilled, blue collar contractor, who had no intention of joining the colony, let alone crash landing on a lost planet.

Okay, overall, I enjoyed this show. Sometimes the EXTREME PERIL got to me. It seemed like there was never a moment of downtime for these people, and that becomes wearying after a while. I also disliked the background music for all the seasons. It was too dramatic. BUT, the story progression is really good, and I liked watching the kids grow up and take on more responsibility as they aged. They gave a lot of great performances, too. I would watch this again with my own kids… if we ever have time for such a thing!