TV Chat #16 – Gilmore Girls, Emily in Paris, Get Back, The Expanse, Blown Away Christmas, Foundation 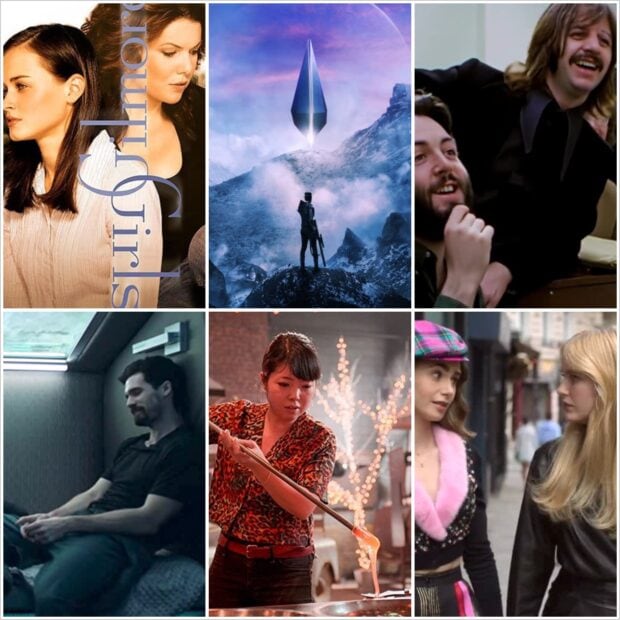 Though I haven't been reading much this year except for my own work (like 600,000 words of my own work), I am watching a lot of TV in my downtime moments. So let's get to the shows I've finished recently!

So I finally finished Gilmore Girls! I watched all of the seasons and then the Netflix special afterward. I have a lot of thoughts and feelings on this show. Lol. Probably too many. I'm glad they always stuck by their quirky nature and the fast fire dialogue. That was always a bonus of the show. But I'm disappointed that they didn't give Rory her happily ever after. She could have easily gotten everything she wanted out of life WITH Logan. There was no need to choose between the two. I guess this is coming from my romance background where you can choose the love you want and everything else too. I get the feeling the show runners caught some flack from that because they tried to give a happily-ever-after in the Netflix show. Notice how I say “tried.” It was half-ass, for sure. Sigh. Overall, I'm glad I watched this show and I can appreciate the faults.

Writer: Darren StarStars: Lily Collins, Philippine Leroy-Beaulieu, Ashley ParkSummary: Emily, an ambitious twenty-something marketing executive from Chicago, unexpectedly lands her dream job in Paris when her company acquires a French luxury marketing company - and she is tasked with revamping their social media strategy. Emily's new life in Paris is filled with intoxicating adventures and surprising challenges as she juggles winning over her work colleagues, making friends, and navigating new romances.

I loved the second season just as much as the first, I gotta say. It was fabulous. There were lots of laugh out loud moments and things to just love. There was this scene where Emily reads out a letter she wrote in broken French with a voice over, and it was so funny. Especially the response from the friend she wrote the letter to. And once again, I loved Emily's friend, Mindy. She had some of the best lines. I will probably watch this season again soon.

Stars: The Beatles, John Lennon, Paul McCartneySummary: Documentary about the music group The Beatles featuring in-studio footage that was shot in early 1969 for the 1970 feature film 'Let It Be.'

The full title is The Beatles: Get Back, of course. But once you read the words “Get Back” you'll have the song stuck in your head forever and ever, amen. This was a long watch because it's nearly 8 hours long. We watched it over the course of two weeks, turning it on when we didn't have other things to watch. Yes, it was boring in parts, but overall, I enjoyed it. I'm a huge Beatles fan. Laura in FACE TIME is a Beatles fan because I am. :) Watching them compose music and jam and play songs by other artists was a lot of fun. I didn't realize that the dynamic within the groups was so one-sided, though. It's clear that George Harrison got put on the back burner most of the time, and that Ringo Starr was just there. He showed up on time and left on time every day, and then he didn't do much between then. It was interesting to watch.

Writer: Daniel Abraham, Mark Fergus, Ty FranckStars: Steven Strait, Dominique Tipper, Wes ChathamSummary: Two hundred years in the future, in a fully colonized solar system, police detective Josephus Miller (Thomas Jane), who was born in the asteroid belt, is given the assignment to find a missing young woman; Julie Mao (Florence Faivre). Meanwhile, James Holden (Steven Strait), the first officer of an ice freighter, is witness to an unprovoked attack upon the ship, by craft believed to be from Mars (MCRN Federation). As news of the attack spreads throughout the system, the incident's flow-on threatens to destabilize already tenuous relations between Earth, Mars and The Belt. Far away from the struggles in deep space, on Earth, Chrisjen Avasarala (Shohreh Aghdashloo), a powerful United Nations executive and diplomat, works to prevent war between Earth and Mars by any means. Soon, the 3 find out the missing woman and the ice freighter's fate are part of a vast covert conspiracy which threatens all humanity. Written by nano_tech

We finished the last season of The Expanse and I'm sad that it's over. I absolutely loved all of the books and seeing them come alive on the screen was so cool. Overall, I think they did a good job with the book material and making it work for six seasons. I'm a little confused as to why they included material from the STRANGE DOGS novella when they're not going to dive into the meat and potatoes of the Laconia world. But oh well. Hopefully they have a spin-off at some point. I've heard some rumors that might happen.

Stars: Bobby Berk, Cat Burns, Katherine GraySummary: Five fan-favorite glass blowers return to the hot shop to compete in a series of Christmas-themed challenges; the winner will receive a $10,000 cash prize, plus an additional $10,000 will be donated to his or her charity of choice.

I have thing thing about reality shows. There are only a few that I like, Project Runway being one of them. So I picked up Blown Away Season 1 at some point during the pandemic and loved it. Blowing glass is really cool. I got to do it once as a teenager and I really wish it was something I could try as an adult (maybe someday). The Holiday/Christmas special was just what I needed. I loved all the projects people made and the winner definitely deserved it. This show is not only fun and interesting but also educational. I highly recommend it.

Writer: Josh Friedman, David S. GoyerStars: Lou Llobell, Jared Harris, Lee PaceSummary: Far in the future, The Empire is about to face a reckoning unlike anything else it's faced before: several Millenia of chaos has been predicted by the galaxy's leading psycho-historian: Hari Seldon. But can The Empire offset the disaster before it begins? —Johnny

And finally Foundation, which I finished yesterday. I read all of the Foundation books both as a teen and young adult. Maybe 4 times? So I was wondering how they were going to adapt that story to the screen. First of all, I should note that the first 2 to 3 episodes are slow. We almost gave up on it. We turned it off in the middle of an episode to go to sleep and didn't pick it back up again. But then my husband was traveling so I decided to pick it up where we left off and I'm glad I did. The action and story started to zoom ahead around the 4th episode and then I couldn't stop. I'm really pleased with the amount of women writers and directors I saw in the credits. I'm also really pleased with the diversity of the cast and the gender changes on many of the characters. These books were great but Asimov was never a fan of women. They were merely set props in his books, two-dimensional cardboard cutouts. This was a breath of fresh air. I do want to mention that there is a serious lack of LGBTQ+ characters though. I hope that's fixed in later seasons. All in all, this one is worth sticking with.