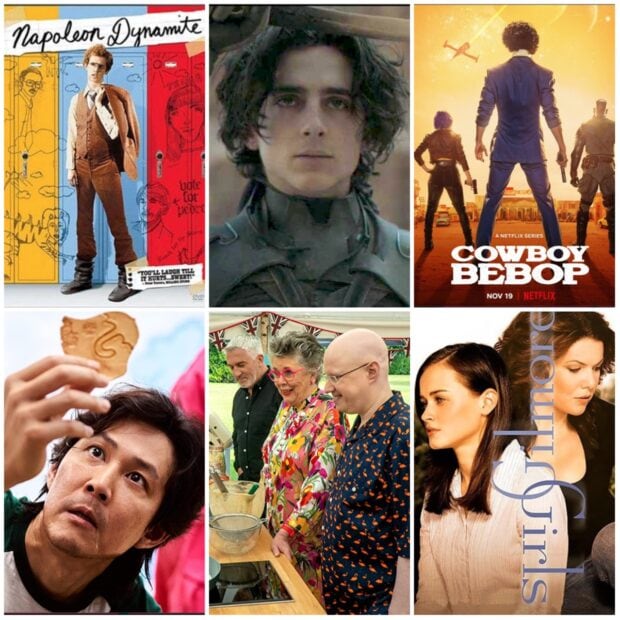 As promised, here's a rundown of the latest shows and movies we've watched here in the Pajonas homestead.

Director: Denis VilleneuveWriter: Jon Spaihts, Denis Villeneuve, Eric RothStars: TimothÃ©e Chalamet, Rebecca Ferguson, ZendayaSummary: A mythic and emotionally charged hero's journey, "Dune" tells the story of Paul Atreides, a brilliant and gifted young man born into a great destiny beyond his understanding, who must travel to the most dangerous planet in the universe to ensure the future of his family and his people. As malevolent forces explode into conflict over the planet's exclusive supply of the most precious resource in existence-a commodity capable of unlocking humanity's greatest potential-only those who can conquer their fear will survive. —Warner Bros.

Possibly the only time in recent history I have looked at my husband and said, “Let's watch a movie on Thursday night and start at 7pm so we can go to bed on time.” Usually, TV is reserved for after 9pm when the kids are in bed and we're all done with work for the day. Not when DUNE premieres, though! To say I loved it is an understatement. I adored it. It was everything I've wanted from a screen adaptation of DUNE, one of my favorite novels of all time. I thought the acting was superb, especially Rebecca Ferguson as Lady Jessica. She finally brought some humanity to the role that was missing in other adaptations. Overall, I loved it and I can't wait to watch it again.

Stars: Lee Jung-jae, Park Hae-soo, Wi Ha-JoonSummary: A story of people who fail at life for various reasons, but suddenly receive a mysterious invitation to participate in a survival game to win more than 38 million US dollars. The game takes place at an isolated island and the participants are locked up until there is a final winner. The story will incorporate popular children's games from the 1970s and 1980s of Korea, such as squid game, literal translation of its Korean name, which is a type of tag where offense and defense use a squid-shaped board drawn in the dirt.

There's a reason why SQUID GAME was at the top of the Netflix charts for so long. It has a lot going for it — mystery, humor, suspense, the occasional gore, plus a recall to childhood games. Yes, there was a lot of murder. Yes, there was even some sex which mostly just grossed me out. Lol. But I stuck around for the mystery, wondering what would happen next and how it would end. It surprised me all the way through. Just a note: we always watch foreign movies/TV in the native language with subtitles. Always. I never watch anything dubbed.

Stars: Paul Hollywood, Mary Berry, Mel GiedroycSummary: A group of British home bakers are convened for a baking competition. There is a theme to each week's competition, generally in the vein of the type of goods the competitors are to bake (i.e. cakes, cookies, pastry, etc.). Each week, they are given a set amount of time to complete each of three challenges, their finished products which are evaluated by expert judges. The first weekly challenge is the signature bake, the competitors to bake something from their home recipes which are to signify who they are as bakers within the category. The second weekly challenge is the technical challenge, where each of the competitors are provided the same recipe, in large part of something they may have never heard of let alone baked before in their lives. This challenge is to see how knowledgeable the competitors are about general baking concepts. Their finished products are evaluated blind in that the judges have no idea who baked what. The third weekly challenge is the showstopper challenge, in which the competitors are to pull out all the stops to produce a baked good which overall grand appearance is as important as taste. At the end of the week based solely on the three challenges, the judges will name the best competitor star baker, and will send one competitor home, that person whose competition has come to an end. The final three competitors enter into the finale, the winner of that week who will be crowned the overall competition winner. —Huggo

We just recently finished the latest season of GBBO and the two new holiday specials. This was an enjoyable season, without too many crazy challenges. I loved all the contestants, especially Chigs, who I now have a major crush on. Lol. I was surprised at the winner of the whole season, though he certainly deserves it if you look at the whole season. I just felt like another contestant did a better job of that last challenge. No matter! One of the beautiful things about GBBO is that we don't take it too seriously.

So, here's a little secret about me. I had never watched GILMORE GIRLS when it was on the first time. In the early 2000s, I was living in New York City, going out, living a young life, and I didn't even have the money for cable. So I missed it the first time around. I'm now watching on Netflix, about an episode per day. I'm into Season 5 now, and I'm struggling with my feelings on it. I definitely CANNOT stop watching. It's like a car crash. One moment I hate Lorelai for her constant lying, and the next I feel sorry for her. I love Rory, and then I can't stand her. But I think that's the whole point of this show. The characters are complex. The writing is especially good. You're not supposed to love or hate anyone. I do dislike two of the characters a lot though. Taylor Doose has got to go. I hate his power trips and passive aggressive attitude. I'm also not a fan of Mrs. Kim and her outrageous treatment of Lane. But overly religious characters bother me on a fundamental level and I suppose this is no different. Her character is very stereotypical Korean Christian, though, and that bothers me. Anyway, there are still a few more seasons to get to! We'll see how I feel at the end.

Writer: Christopher L. YostStars: John Cho, Mustafa Shakir, Daniella PinedaSummary: The space Western story follows Spike Spiegel and his rag-tag crew of bounty hunters, or Cowboys, as they try to capture the galaxy's worst criminals and survive the unexpected dangers they encounter throughout space, sometimes saving the world in the process but always leaving millions in damages. —deadline

This show is so great. I do NOT understand all the “fanboys” who are hating on it right now. I love the sets and the costumes and the wild west in space. It's all the things I loved about the anime version. I've actually taken a lot of inspiration from COWBOY BEBOP over the years for my own writing because I love it so much. I think Netflix did an amazing job with the remake and update. Faye is finally a real character, not just some flighty tart with big boobs. Daniela Pinella has done an amazing job with her character. John Cho is not how I pictured Spike but he grew on me. Mustafa Shakir can say more with a glance than most people do with a hundred words. I'm really sad that Netflix has canceled this because the “fans” were nasty. I hope they rot in their basements, those little keyboard warriors.

I know I watched NAPOLEAN DYNAMITE at one point after it came out and then never watched it again. Turns out there's a reason why! Man, I do not like this movie. It's awkward and makes no real story sense. My youngest child wanted to watch it because her friends had seen it, so we watched it for family movie night. My oldest child was bored at 45 minutes, I let her go to her room. Lol. I wish I had gone too! Ugh. I was very happy when it was over. My youngest was too. She didn't really enjoy it either. My husband, though, has been going around talking like Napolean every chance he can get. Sigh.

Okay, now you're all caught up on what I've been watching. Do you have any thoughts on any of these shows/movies? Let me know in the comments!