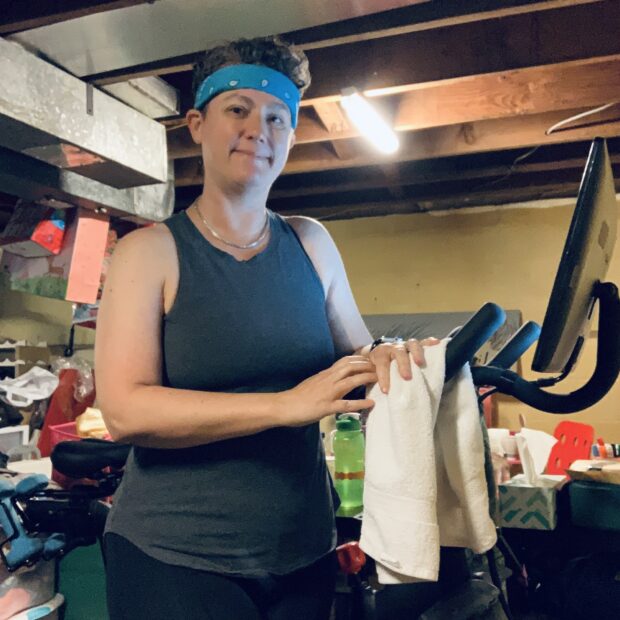 This is obviously NOT book-related whatsoever, but I thought I would share how I managed to build a consistent fitness habit over the last year using my Peloton bike and their app full of fitness programs.

As you may remember, I broke my leg in March 2019. It was a pretty bad break that required five hours of surgery to put the bones back together. They inserted a ton of hardware in my leg, and I had to do six months of physical therapy after to finally be able to walk a mile again. 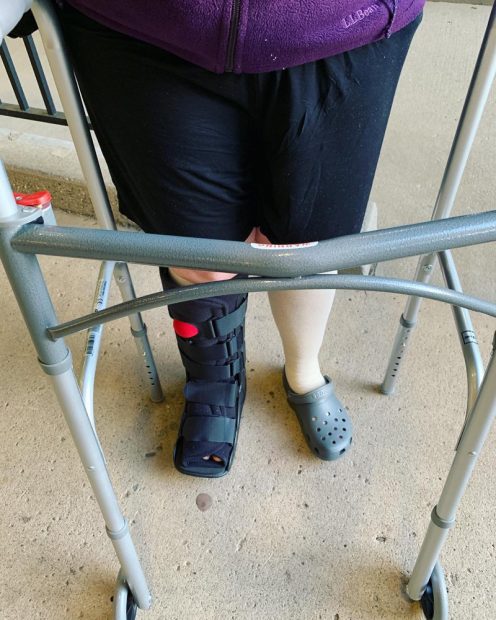 Now, before I broke my leg, I was feeling decent. I was definitely overweight but I was walking several miles every day and trying to make that more of a habit. I hated the gym because of the other people there, so I wasn't lifting or doing much of anything. When I was walking, my heart rate would maybe reach 120, so not much. I hated running. It only ever hurt. I didn't own a bike and I had never taken a spin class.

I broke my leg and then I was sedentary for months. I used carbs and sugar to make me feel better, and that, in combination with the sedentary life, made me gain even more weight. 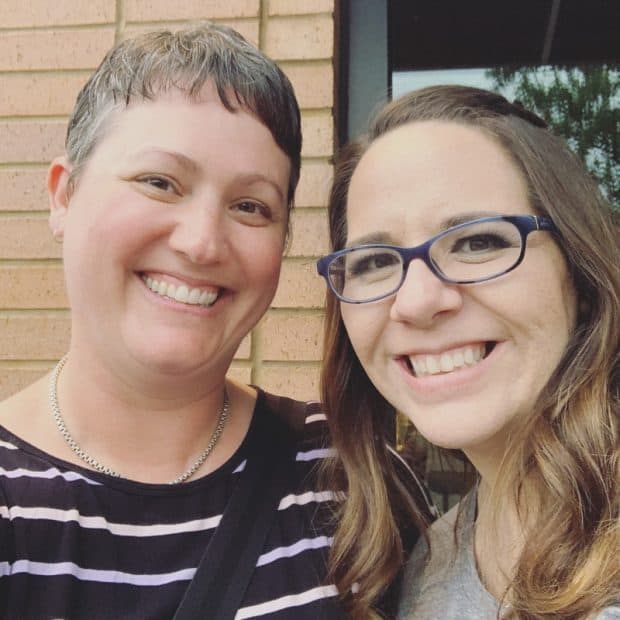 You can see how round my face was in this photo. So much extra weight!

Fast forward to summer 2020 of the pandemic! My husband said, “I think we should get a Peloton bike. It's a cool company and I know some people who have them and love them. Would you ride it?”

I told him maybe. I mean, I had never taken a spin class and didn't own a road bike. Why would I ride the Peloton? I'd give it a try but I wasn't guaranteeing anything. The arrival of the Peloton Bike

It was a year ago yesterday that I rode the bike for the first time. By this time, I had lost a lot of weight through healthier, lower-carb eating and intermittent fasting, so I was ready to add in more exercise. I remember that my first class was a 20 minute Cody Rigsby Beginner Ride, and I kept thinking the whole time, “Who is this guy?” Lol. He was having a great time and I was completely GASSED after. But I saw the appeal. He kept me entertained while I sweating it out. Huh. It wasn't so bad. It was actually kinda fun!

But I was severely out of shape. I was so sore after that first ride, it took a lot to get me back on the bike. I tried a Robin Arzon class after, and I think that's when I fell in love. Right on the second ride. I loved her positive attitude and the way she talked me through every little thing. I was wrecked after that class too, but this time, I wanted to get back on the bike again.

October through December 2020, I concentrated on just getting on the bike and trying to ride twice per week while also walking Lulu. I didn't realize how severely out of shape I was until I was riding more frequently. My heart rate would soar in the classes, and it would take me forever to cool down. I'm really surprised my body didn't give out!

I learned about intervals in the classes by listening to the instructors. Robin says, “Intervals build athletes,” and I took that to heart. So after my 20 min beginners classes, I would add on another 10 min scenic ride where I would do one-minute speed and resistance intervals, hoping this would increase my fitness.

It worked! By the time December came around, I was feeling good and biking three times per week. I was taking longer classes and still working on my overall fitness. And though I couldn't always match cadence and resistance to what the instructor called out, I was definitely getting better.

And then my friend Kelly said, “You should try Power Zone training.”

It's a long explanation, but essentially, you take an FTP (Functional Threshold Power) test, which is an all-out ride-as-hard-as-you-can-until-you-almost-puke for 20 minutes ride, and then they take your AVERAGE output (power) from the test to give you 7 zones of power to train in.

Zone 1 is the easiest. It's basically just pedal without much resistance. Zone 7 is the hardest, pedaling like a murderer is running after you up a hill. These zones are specific to YOU based on your test, so you're not competing against others. All the classes are built to zones so the instructor may give a range of cadences and resistances, but it's just a range. They tell you to be in your Zone 2 or Zone 5 or whatever, and you need to be there, figuring out the right mix of cadence and resistance to get there. You maintain your output in your zone at whatever speed and resistance is comfortable to you. 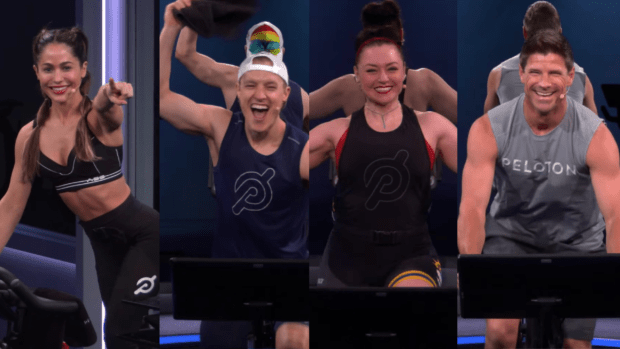 I took my first test December 30, 2020, and then I started the Peloton program, Discover Your Power Zones, and I was hooked. Everything was still hard but achievable, and I didn't have to worry about personal records anymore. In each class I was learning more about fitness and the science behind power zone training and why it works. It wasn't just fun songs and sweating anymore. I was LEARNING, and I found that fun too. I joined the Power Zone Pack (both their website and their FB group) and started my first Power Zone Challenge in January on my birthday! 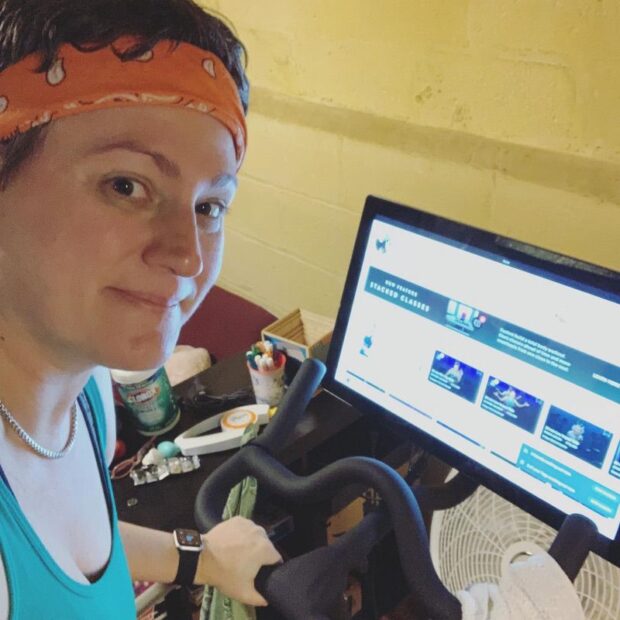 Matt Wilpers always says that you should build a schedule for your fitness. Make a plan and stick with it. He recommends 3-4 core rides per week with your hardest rides first, and always a long endurance ride somewhere in there. I was getting that with the Power Zone Pack Challenges, but I also wanted to start lifting too.

So in January, I started a schedule. First, I used the Hard Core on the Floor schedule in January to get to know more of the strength instructors and what I liked. Then February through August, I planned my own workout weeks using Google Sheets. Four rides per week plus arm strength, core strength, yoga and stretching. If it was on the schedule, I did it. I didn't miss a day. On the days I wasn't riding, I was walking Lulu and doing other things. 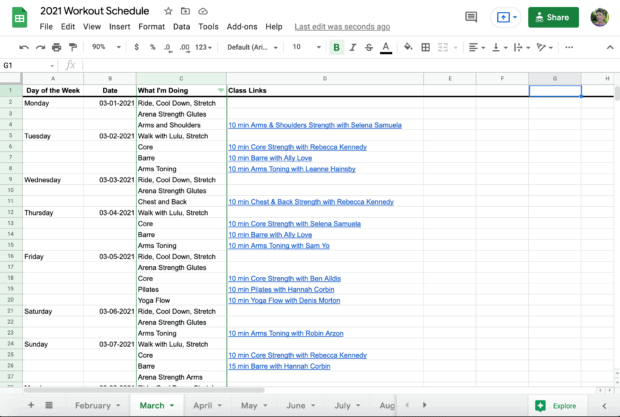 I mixed it up too. I added in resistance bands for a while, and then I determined I didn't like them. I lifted heavy for a while, and then I realized I like to lift lighter with more reps. I experimented with shorter core work more often, and I liked that better, too. I gave myself permission to try things and hate them and never do them again. I was committed to EXERCISE not a particular kind of exercise until I was sure I loved it. 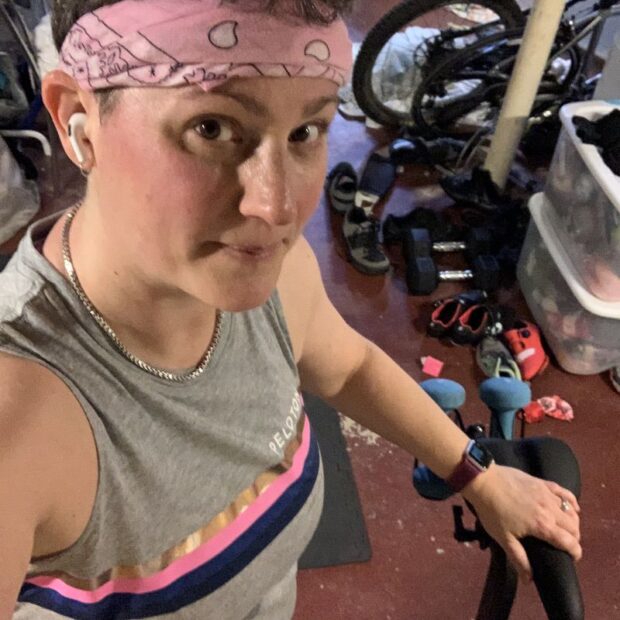 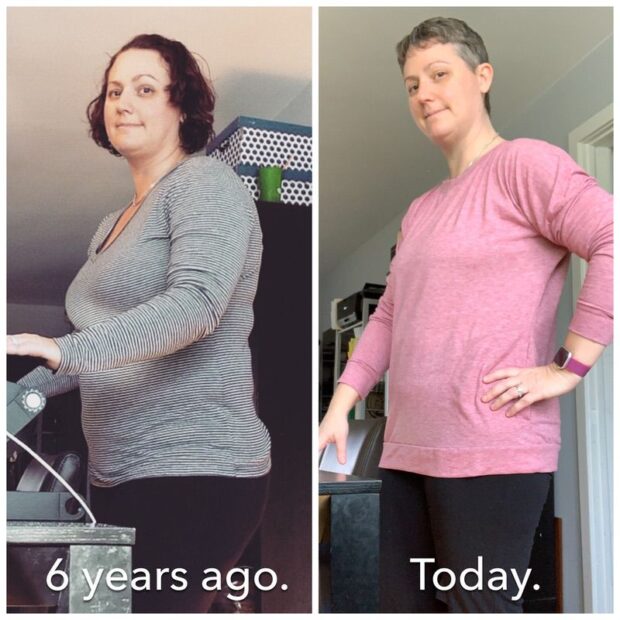 Sure, there were times when I woke up and I was wrecked from my insomnia, or I was just tired and didn't want to workout. Guess what? I did it anyway. IT WAS ON THE SCHEDULE. It wasn't yet a habit, but it was close.

Do it until it's a habit

This summer I finally figured out what I loved and what I would be willing to do long term. Now, the cornerstones of my workouts are the 4 rides per week (3 Power Zone and 1 Climb Ride to build leg muscle), plus 5 Arms and Light Weights, 3 Core workouts, and plenty of stretching. I do it all without a schedule now, except for the Challenge schedule. Even when I'm not in a Power Zone Pack Challenge, I'm still doing the same things. 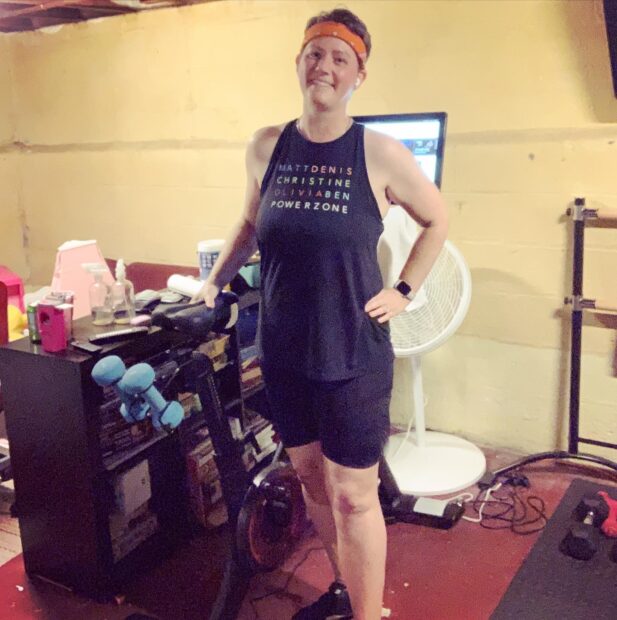 I've taken the FTP test now 3 times and my fitness levels go up with each test, so I'm progressively getting harder and harder workouts based on what I can handle. I can now recover my heart rate at higher intensities than I ever thought possible, and my legs look better than they ever have. My husband says my legs have never looked like this and he's known me for over 20 years.

This is only the beginning

I have over 400 rides, and over 2000 miles on the bike, and almost 15,000 minutes of workouts for this year on Peloton, and it's only the beginning. People get shoutouts on rides for thousands of rides on the platform, and I want to be one of those people. I'm completely committed to this. 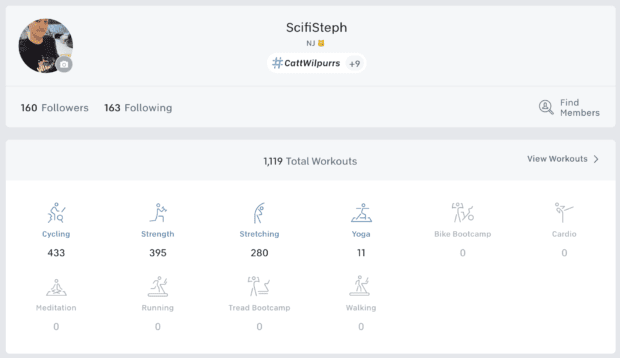 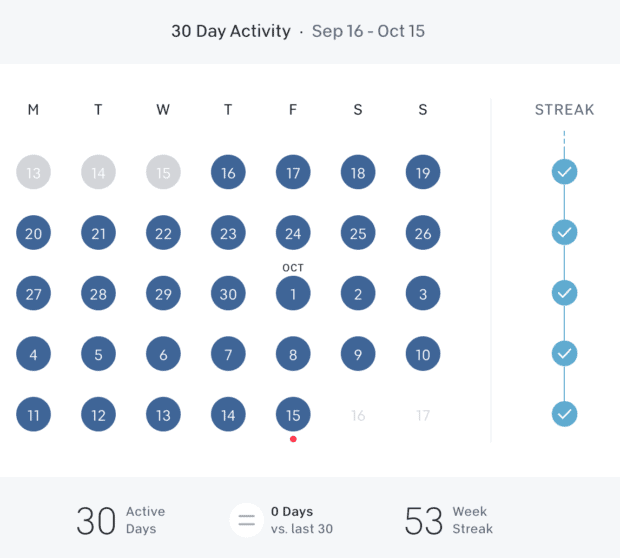 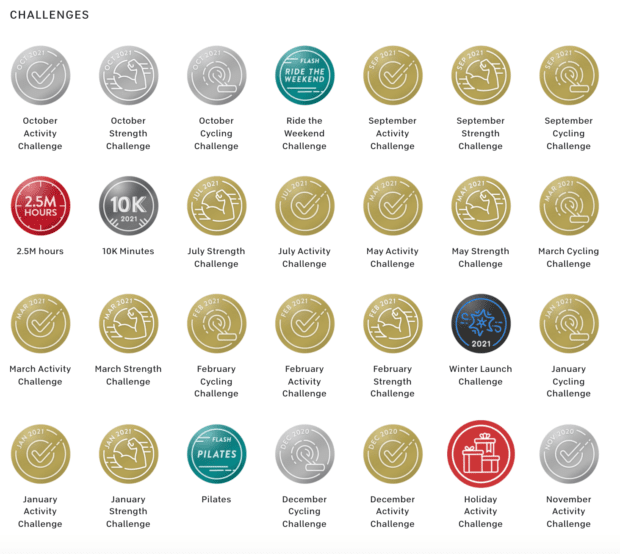 Maybe if you've read this far, you're inspired to pick up the fitness too. I hope you are. I am so much better off than I was two years ago. I no longer have hip or lower back pain. That all went away as soon as I built my leg and glute muscles. Upper back pain has definitely lessened since building my arm muscles (though I sometimes still sleep wrong and cause problems). My metabolism is high and I can maintain my weight now and eat well. It has completely changed my life for the better.

Thank you, Peloton! I am a Peloton cult member for life. :)