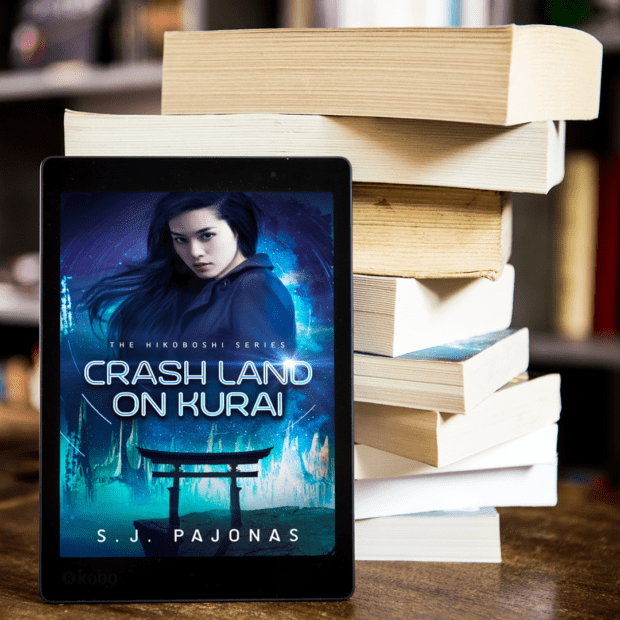 I've decided to make CRASH LAND ON KURAI free! I have no idea when I'm going to take it off free and make it a paid book again… or if I ever will. I'm being very wishy-washy about the details because I'd like to make my life easier by keeping it free. It may be better to make it paid at some point, though… Anyway, my point here is to get it while you can! And maybe in the future, once you've read and loved the whole series, it'll still be free so you can tell your friends. ;)

I remember writing this book and having a lot of fun with it. It has more action adventure than my other books and includes an interesting take on corporations running a whole world. This series is also an ode to all the science fiction I loved growing up. You'll see callbacks to Blade Runner and Isaac Asimov's robot series, among other greats. Hopefully, you'll find it fun too! Plus, there's a slow burn romance here that even my brother loved. Yumi and Rin have so much going on, both in and out of the bedroom. There's lots of fantastic reading ahead for you!

You'll find all the links on the CRASH LAND ON KURAI page, but just know that Amazon is DRAGGING ITS FEET making this book free in all the international markets. I am constantly writing to them and asking them to price match to free (this is the only way they allow long-term free books on their platform) but they don't always comply. It's currently free on the dot com store and a few others. IF IT IS NOT AVAILABLE FOR FREE IN YOUR MARKET, please download using the Direct button. When you download Direct, you can get the book on your ebook reader via my Direct store and Bookfunnel.

When a space journalist crashes into a deadly intra-colony war, her hunt for the truth will either save her life or sentence her to death…

Starship journalist Yumi Minamoto's hot temper makes turning around her poor reputation an impossible challenge. While on a mission with her brother Shintaro to investigate a neighboring colony, her vessel comes under vicious attack, leaving her bleeding and disoriented. During the battle, Yumi's boss hands off a data device with secret, valuable information inside, just before her escape pod slams into a nearby moon.

Clinging to life and desperate to find her brother, Yumi and her fellow survivors emerge into an alien civil war with unknown agendas and honor codes. Navigating their differences is treacherous, and everything becomes more complicated when one of the natives takes a keen interest in her that Yumi can’t say no to. As she's captured and used as a pawn in negotiations, the journalist has a hunch something on the device could help her and the crew… if only it hadn't gone missing during the crash.

Can Yumi use her truth-seeking skills to ally with the right side and recover the data before her life is torn apart in a battle for planetary supremacy?

I hope you enjoy CRASH LAND ON KURAI!