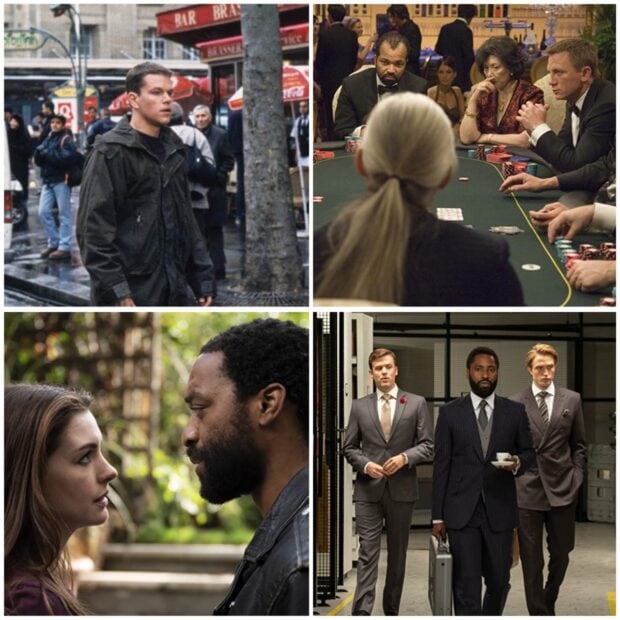 There has been a lot of TV and Movies around here as we are still sheltering mostly indoors due to the pandemic and winter. In this post, I'll cover the movies we've watched recently and then I'll be back next week to cover the TV shows!

Director: Doug LimanWriter: Tony Gilroy, W. Blake HerronStars: Franka Potente, Matt Damon, Chris CooperSummary: When a body is recovered at sea still alive, the mystery man (Damon) seems to have forgotten everything in life, including who he was. Eventually he begins to remember smaller details in life and soon finds out that his name was Jason Bourne. What he doesn't like is the gun and fake passports belonging to him. Now Bourne, and his new friend, Marie Helena Kreutz (Potente) travel from country to country in search of his new identity. But someone is not happy to see him alive, and is frantically trying to track him down. Written by Peet

We recently purchased a HD DVD player and decided to start our collection with The Bourne Trilogy. Jason Bourne is a long-time favorite character around these parts. My husband and I both loved these movies the first time around (though they get a little silly farther on in the series). Still, the first two are definitely solid movies. It was nice seeing them again and really noticing how far technology has come. When we made it to the last movie in the set, The Bourne Ultimatum, I was really impressed with how they wove everything together from the previous movies. We ended our watching marathon with The Bourne Legacy, which does not have Jason Bourne/Matt Damon, but instead has a different agent and a different kind of mission. This one was still likable despite not having the original cast. I'm glad we bought them and re-watched them!

Director: Martin CampbellWriter: Neal Purvis, Robert WadeStars: Daniel Craig, Eva Green, Judi DenchSummary: James Bond (Daniel Craig) goes on his first mission as a 00. Le Chiffre (Mads Mikkelsen) is a banker to the world's terrorists. He is participating in a poker game at Montenegro, where he must win back his money, in order to stay safe amongst the terrorist market. The boss of MI6, known simply as "M" (Dame Judi Dench) sends Bond, along with Vesper Lynd Eva Green) to attend this game and prevent Le Chiffre from winning. Bond, using help from Felix Leiter (Jeffrey Wright), Rene Mathis (Giancarlo Giannini), and having Vesper pose as his partner, enters the most important poker game in his already dangerous career. But if Bond defeats Le Chiffre, will he and Vesper Lynd remain safe? Written by simon

We also purchased a box set of the Daniel Craig 007 James Bond films. We had originally seen all of the films in the theater, years apart between each, so watching them all in a row was a nice treat. This time I could actually see and understand the links between all the films that I had forgotten the first time around. They are still pretty silly but they're comforting in that nostalgic way. That scene in Casino Royale when James goes to his car to stop a poison and restarts his heart is both terrifying and laughable… I mean, COME ON. But hey, it's James Bond. Gotta suspend some disbelief here, am I right? Of all the movies, Casino Royale is still my favorite, followed by Skyfall. The only thing that bothers me about Casino Royale is the two endings. It always feels like it goes on too long. Quantum of Solace is the weakest of them all, and Spectre has a dumb villain I just rolled my eyes at. Can't win them all!

Director: Doug LimanWriter: Steven KnightStars: Chiwetel Ejiofor, Anne Hathaway, SonicSummary: Paxton and Linda, a couple at the end of their relationship who are only still living together because of lock-down orders in the U.K. The two attempt to navigate their new situations as COVID-19 spreads around the globe; Paxton is furloughed from his job, while Linda is forced to fire employees from her company as they look to cut costs. Through his boss Malcolm, Paxton "using a fake identity" accepts work transporting goods and materials from places that are closing during the lock-down. One of his stops is a department store that's part of Linda's corporation. Dissatisfied with their current state of life, Paxton and Linda design a plan to steal an expensive diamond from the department store so they can become rich. Written by Canon y mus

One night we were looking for something to watch when my husband said someone had recommended Locked Down, with Anne Hathaway and Chiwetel Ejiofor. I love both of these actors so I said yes, and I'm glad we watched it. It was funny and charming, and VERY about the times we're living in, locked down during the pandemic. Things I loved about this movie — Anne in her business-up-top and pajamas-down-below outfits, Chiwetel's boss (Ben Kingsley) who opens every zoom call with a prayer, the angst of being cooped up, the 7pm banging on pots and pans outside, the empty streets. The whole story was fun too about a jewel heist from Harrods, and their declining (and reigniting) marriage. One of the interesting tidbits of trivia from IMDB is that “because of the hectic pace of completing principal photography in just 18 days, the stars didn't have the time to properly prepare, and for some scenes, Hathaway's and Ejiofor's lines had to be taped to their eyeline.” Not surprising in the least! This one made me laugh and smile, and some parts were bittersweet, but overall, I loved it.

Director: Christopher NolanWriter: Christopher NolanStars: John David Washington, Robert Pattinson, Elizabeth DebickiSummary: In a twilight world of international espionage, an unnamed CIA operative, known as The Protagonist, is recruited by a mysterious organization called Tenet to participate in a global assignment that unfolds beyond real time. The mission: prevent Andrei Sator, a renegade Russian oligarch with precognition abilities, from starting World War III. The Protagonist will soon master the art of "time inversion" as a way of countering the threat that is to come. Written by jesusblack-91294

Another HD DVD that we picked up, sight unseen, was Tenet. I had heard a lot about this movie and I wanted to see it because I really love Christopher Nolan (Interstellar is one of my favorite movies). We watched this in two sessions because we're old and cannot make it through a 2+ hour movie in one evening, so my thoughts are broken up a bit. The first half of the movie didn't impress me. All the characters were extremely competent and they figured things out quickly enough. I didn't develop any kind of attachment to them and I wasn't invested. But the second night of watching included the portion of the film where they all started traveling back in time, and then suddenly, it got really interesting. I'm still not sure I completely understand it, and I'm not sure I'm SUPPOSED to, you know? By the end, I was finally invested and looking at the first half of the movie in an entirely different light. I want to watch it again someday for sure! If you're thinking about checking out this film, I highly recommend sticking it out to the end.

(I'm trying out a IMDB plugin here. If this ever breaks or looks horrible on your mobile device, please just contact me and I'll switch back to static images. No big deal, but wanted to try something new!)