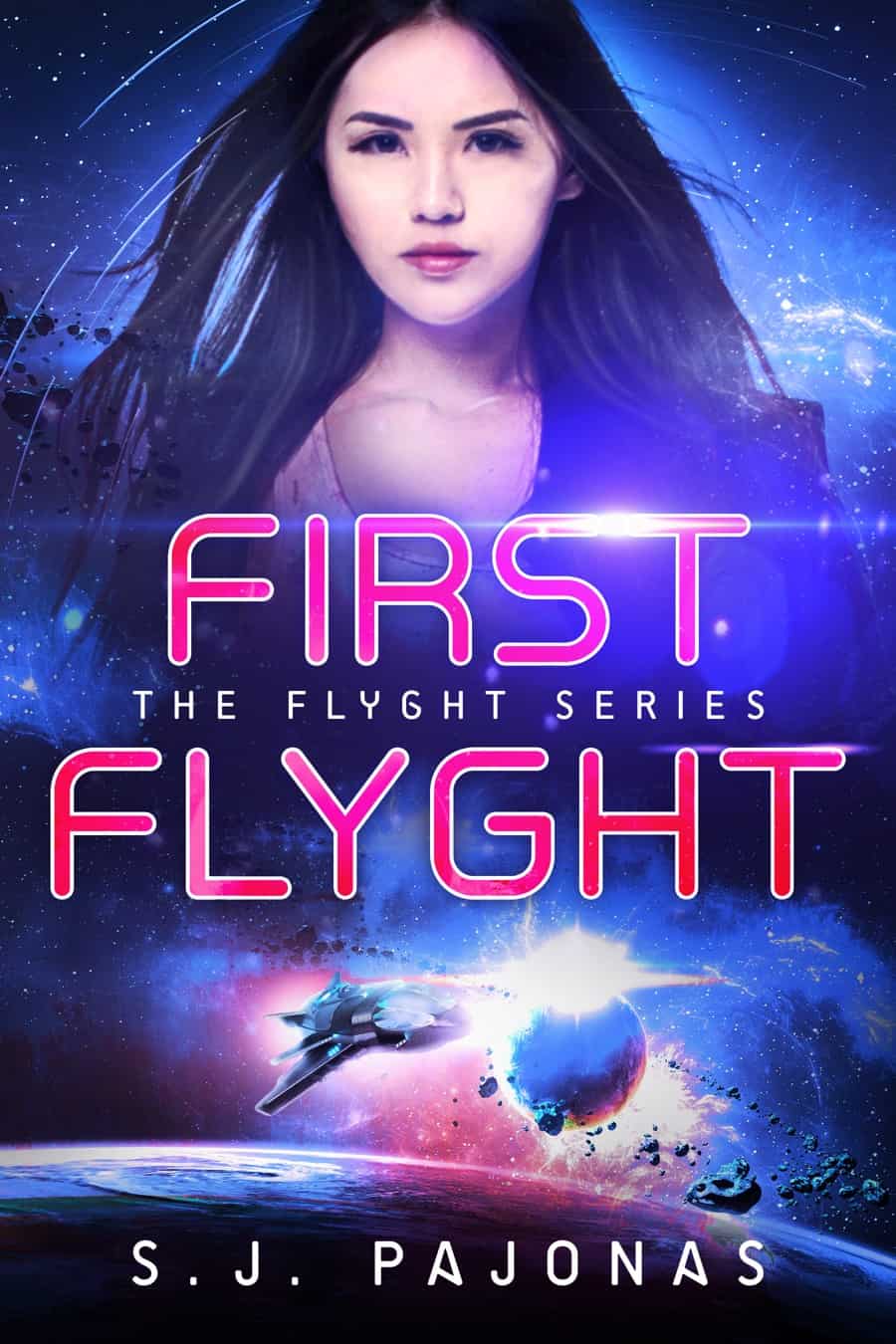 Yes, you heard me right! FIRST FLYGHT is free on all stores for the whole month! For January 2021, I have set this book to free so everyone can try out this series and enjoy adventures with Vivian and the crew of the Amagi. So if you haven’t tried this one out yet, now is the time to get in there and check it out. 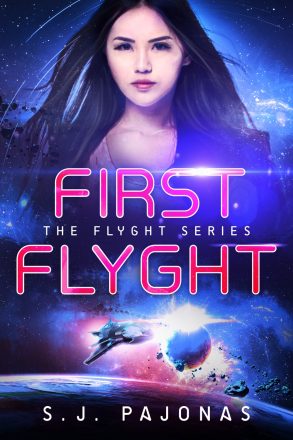 I’m so excited to be bringing you this book for free for a limited time. Hopefully Amazon doesn’t give me any hassles about keeping it free in all countries like I asked for, but please drop me a line if it’s not free for you. I can always send you a copy. I will try to keep it free in the US, CA, AU, and UK at the VERY least, though I see it’s free in even more countries than that (at the time of this post).

In the meantime, I have a bunch of posts scheduled for the blog about FIRST FLYGHT and the Flyght Series so be sure to check back here often to learn more about the inspiration for this exciting series.

To kick things off, check out this interview I did for a fellow blogger!

How did you come up with the idea for the Flyght Series?

This is always such a hard question to answer! Because a ton of ideas led to the ultimate idea that became the series. First, I wanted to write about a captain, on the run, doing things her way. Kind of like Mal from Firefly. Taking jobs where she could and scraping by. Then I thought it would be cool if she was running errands for people like Uber and Lyft do here on Earth. Then I really liked the idea of a family betrayal that led to having to make money and buy the lost property back. Ultimately, all of these ideas became the Flyght Series. I held onto the ideas for over a year until they finally made sense in my head. Sometimes it takes a lot for a really good idea to make it to the page!

Vivian has such a love for agriculture. What made you choose this passion for her?

Here’s a little secret. I have a black thumb. I’m terrible with plants! But in my dreams, I’m a horticulturalist extraordinaire. I’ve been fascinated with “farming of the future” and how we’ll handle farming once the environment turns on us (it will eventually). So when it came time to choose an occupation for Vivian, I went straight to farming because wish-fulfillment, naturally. Then farming led to the family farm idea which led to LOSING the family farm. The story grew from there, and my own wish to be an awesome farmer. Maybe when I retire I can grow that green thumb?

Why did you choose to use the reverse harem trope in this series?

When I first heard about “reverse harem” I was skeptical that anyone could really pull it off. One woman with a harem/group of men that she’s romantically involved with? It seems a little outrageous, right? But once I started reading them, I saw the appeal. If you love characters and seeing the chemistry between different pairings, like in a love triangle, but don’t want to HAVE to choose, then reverse harem is for you! She doesn’t have to choose! The trick for me was finding the right circumstances for a harem to happen and be normalized. In this case, there was a rampant gene anomaly, invented by the original settlers, that would allow for more men to be born than women. In their eyes, more men meant a bigger workforce for colonization, since androids/robots were outlawed. But the gene mutated and caused problems. Women became the minority but managed to take over the government and military. So “relationship networks” were developed to give more men a chance to be with women and for women to have control over their relationships. Problem solved! Or maybe not…

Who is your favorite character, or what character was the most fun to write?

Of course, my favorite character of the novels is the heroine, Vivian. I fell in love with her right away. I knew she would be a fun one to write, and she didn’t disappoint me! But I also really loved Jinzo, her main number one mate in the books. I had to come up with the right personality for him, and he continually surprised me with his strength and flexibility.

Let’s talk about how you wrote the Flyght Series. Did you do any outlining? Did it take you in any unexpected directions?

I originally started with an idea for the first book, and then I knew how I wanted to end the series. Once I had a beginning and an end, I tried to figure out how many books the series would have. I originally thought the series would be 9 books, but eventually, I went with 6, and I think that was the right decision. With that in mind, I came up with a loose adventure for each book, and then discovered the rest along the way! I’m a horrible outliner but I try to do what I can as I write.

Using settlers from the western United States and Brazil was an interesting choice. What made you choose these regions in particular?

When I decided to write the Flyght Series, I chose to use the same universe as both the Nogiku Series and the Hikoboshi Series. In the Nogiku Series, I explain that after a period of wars and then an Environmental Decline, ships from all over the world took off from different countries for different solar systems. They called this the Exodus, and they left behind only a small population on Earth. So my thought was, “What if ships that left from California and Brazil happened to go to two close solar systems and developed a partnership?” And that’s how I came up with the Duo Systems. Two connected systems, the Brazilianos and the Californikus Systems, have a symbiotic relationship that includes trade and culture. For me, choosing these systems was all about the culture and extrapolating it out to a starry diaspora. I gave a lot of thought to who would be on these ships and the culture they would take with them. It was a fun experiment and led to some great creative leaps.

People have this fantasy of what it’s like to be a novelist. But what’s a normal day for you really like?

Normally, my days start with exercising. I’m pretty abnormal in this because so many authors get up and get in their words right away! I am so not a morning person. Getting exercise is a better idea for me in the morning. I exercise almost every day between my Peloton bike, walking, and yoga. Then I get some work admin stuff done, shower, and eat lunch. In the afternoon, I write and run errands. In the evening, I’ll take care of blog writing or maintenance, and then try to enjoy some downtime from 8PM until bed. It’s definitely not very glamorous, but it gets the job done! 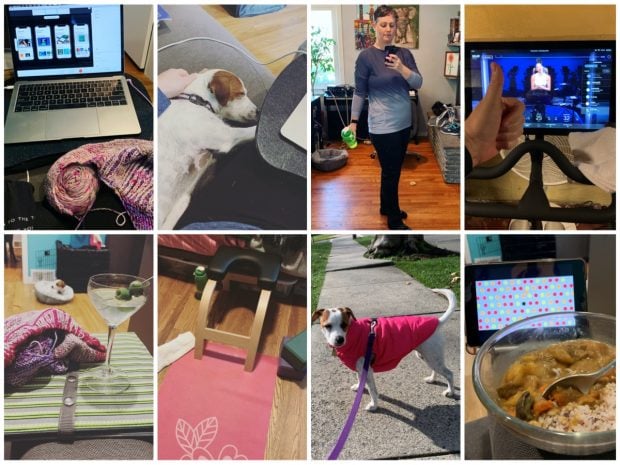 Photos of my knitting, writing on my computer, walking my dog Lulu, riding my Peloton bike, my yoga setup, and eating! – S. J. Pajonas

Getting things done is about having daily or weekly habits and practices to keep working on your project. Tell us about your writing rituals!

I only actively write when I’m working on a first draft of a project. I know people who feel like they HAVE to write every day to be an author, but that doesn’t work for me. When I start a new project, I set daily goals for word counts, and I keep going, taking minimal time off, until the book is completed. I try not to stop and go back to edit or re-read unless I’m REALLY stuck. Forward momentum is the most important thing for me! Recently, I’ve found that sprinting has been working out great for me. If I sprint for 20 min, I can usually write 600-700 words. Then I take 10 min off and go again. If I do three of these sessions, I can get in about 2000 words! That’s a good day’s work for me especially since I do so many other things around home for my family and kids.

What’s your definition of success in your writing business?

Success has been hard for me to define! And it has changed many times over the last seven years. At first, my definition relied on sales. Was I selling books? How many? And how much money was I making to offset my initial costs? But that’s an unreliable metric for success because many people would consider publishing the books AT ALL success. Does the number of reviews indicate success? Or how many books I’ve published? It’s hard to define! But over the years my idea of success has become publishing more books that I enjoyed writing. Each book I work on and enjoy, then move towards publication, is another success. The ultimate goal is to have a dedicated audience for my work. Success is more readers who have enjoyed my books, like I have enjoyed writing them.

Tell us about a TV series you loved recently!

There are so many great shows on TV right now, and with a number of streaming services pumping out new content, it’s hard to fit them all in! In the last six months, my husband and I have loved The Mandalorian, Ozark, Schitt’s Creek, Kim’s Convenience, The Crown, Killjoys, The Expanse, and many, many more.

And finally tell us about the last book you read…

Funny enough, I just re-read DUNE, which I haven’t read in at least 15 years. It was one of my favorite books as a teen, and I’m excited for the upcoming movie, which is now delayed due to the COVID-19 pandemic. It was great to re-read this classic and enjoy it again.

Don’t forget to download FIRST FLYGHT for free during the month of January, 2021! You can start this series now and enjoy your adventures with Vivian and the crew of the Amagi!