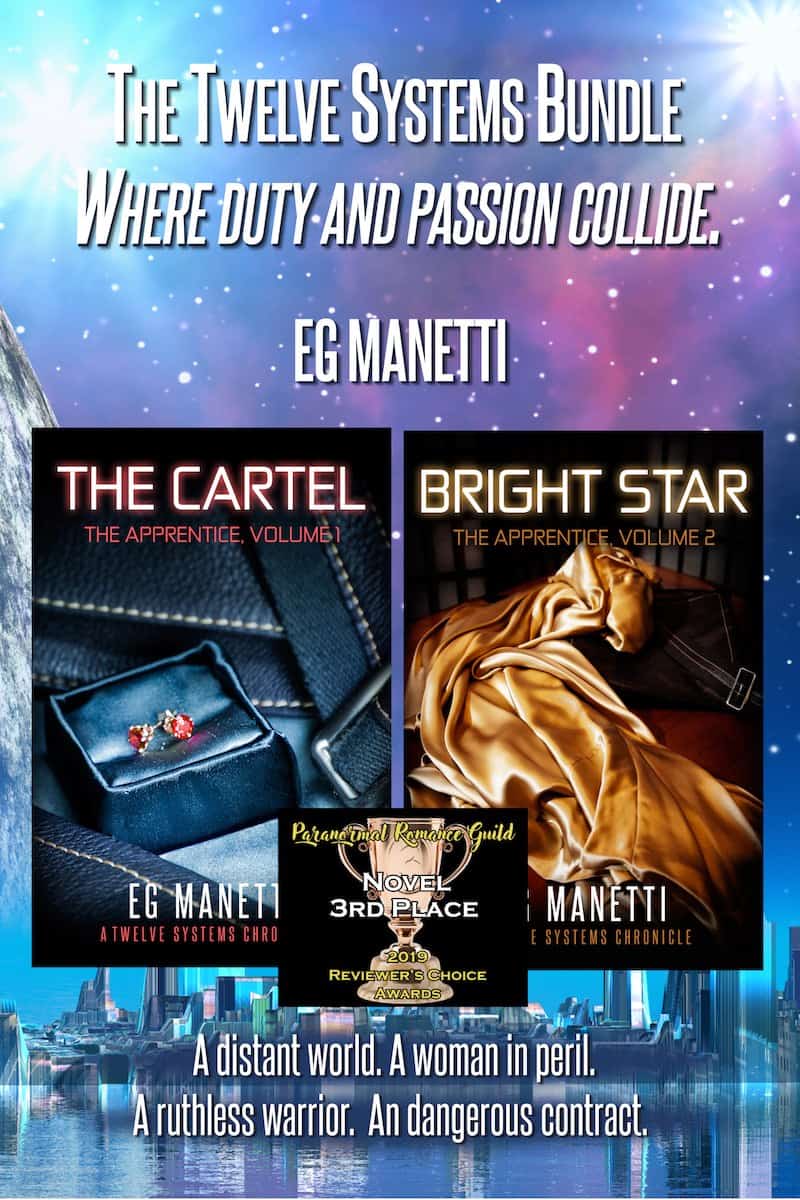 Continuing with the Summer of SFR, I have E. G. Manetti here today to tell us about her series, THE TWELVE SYSTEMS!

Tell us a little about yourself, E. G….

Award-winning author, EG Manetti has always enjoyed a vivid imagination and occasional scribbling. In 2010 she was struck by the inspiration for The Twelve Systems Chronicles. The draft of a single novel soon became three, and then more. In 2012, after several hundred thousand words, The Cartel: The Apprentice, Volume 1 was published, followed by seven other volumes. The latest, Chalice Bearer, released January 21, 2020. To date, the first two volumes have received bronze Reviewers Choice awards from Paranormal Romance Guild, and volumes three and five were finalists for the prestigious InD’tale RONE Award (Reward for Novel Excellence)

A former information technology project manager, EG writes as often as possible, cooks exceptionally, and gardens adequately. She resides in Florida with her beloved (and often confounded) husband and their severely OCD Jack Russell Terrier.

I have a Jack Russell too, and they can be quite the handful! I can't even garden adequately. Lol.

I asked E. G., “Why did you write THE TWELVE SYSTEMS SERIES?”

“The two volume boxed set, The Twelve Systems Bundle is a 2019 Paranormal Guild Reviewers Choice Award recipient. Loving epic science fiction and science fiction romance, I could not resist the urge to combine the two. The series centers on the heroine's, Lilian's, determination to survive against the odds, and the impact she has on those around her. Because it is science fiction romance, the hero, Lucius, is an alpha male and a master of the universe in the truest sense of the terms. One of the aspects I most love about the series is the relationship between Lilian and Lucius how their expectations evolve.”

Epic science fiction is what I love best! 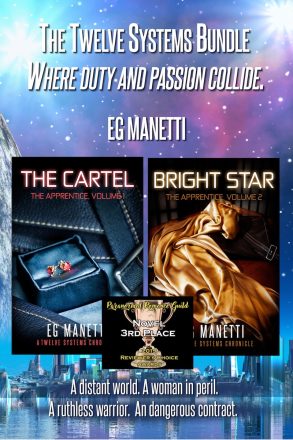 Where duty and passion collide.

Life within the Serengeti Cartel is perilous, riddled with malice and intrigue that can threaten the mightiest of warriors. For Lilian – brilliant, despised, and one misstep away from execution for her father’s crimes – all that stands between her and destruction is the powerful warrior Lucius Mercio. In return for his protection, Lilian becomes Lucius' apprentice, yielding control of her body, will, and intellect.

THE CARTEL: The Apprentice, Volume 1

Lucius Mercio commands one of the most powerful Cartels in the Twelve Systems. As clever and ambitious as he is ruthless, Lucius' wealth, influence, and power place him among the elite of the warrior caste. It is not enough. Lucius intends to take his Cartel to unimaginable heights with the aid of Lilian's brilliance. He faces only one obstacle. Lucius must keep Lilian alive.

In the second volume in the Twelve Systems Chronicles, Lilian’s enemies are more determined than ever to see her destroyed. A visitor from her past will endanger her future and threaten to destroy Lucius’ slowly developing trust. To survive the next set of challenges Lilian will need to find new reserves of courage, wit, and determination. When Lucius’ motivations and ambitions are revealed, they are far more extraordinary than Lilian imagined.

Check out THE TWELVE SYSTEMS BUNDLE on Amazon, Apple Books, Nook, Kobo, Google Play, and more via Books2Read…
Via Books2Read