Featuring EMBRACE THE PASSION: PETS IN SPACE 3 By Carol Van Natta And Other Authors 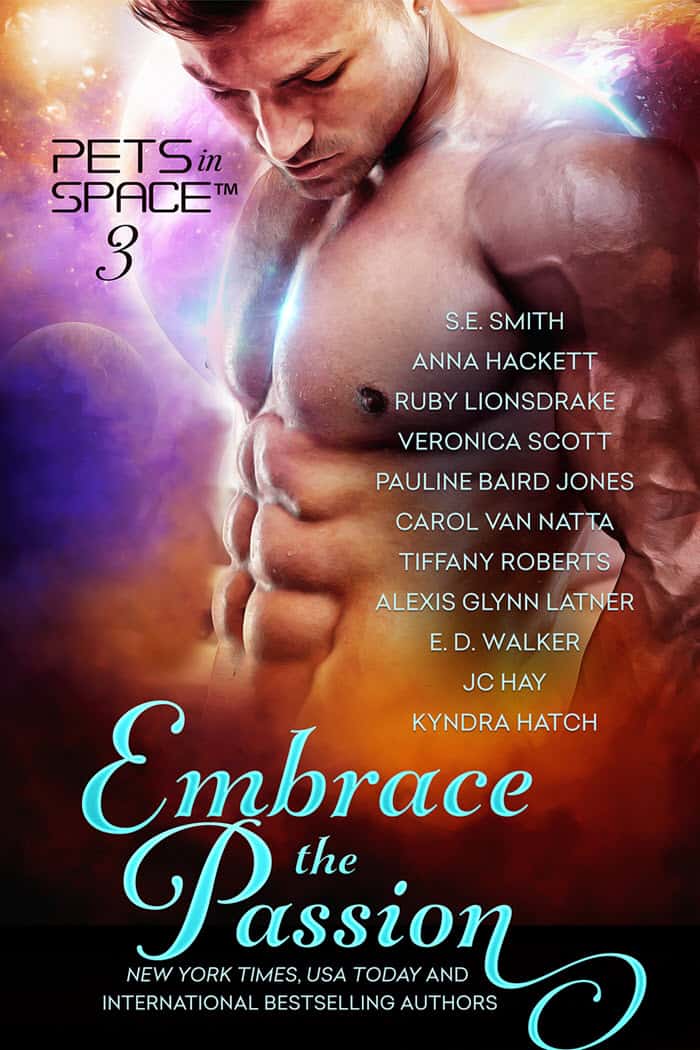 PETS IN SPACE is a great anthology in its third incarnation that donates proceeds to charity (10% of the first month of profits goes to Hero-Dogs.org). I've had a lot of author friends participate in each of the anthologies, and today, I have Carol Van Natta here to talk about her contribution, CATS OF WAR.

I asked Carol, “What's your favorite part of PETS IN SPACE and CATS OF WAR?”

My favorite thing about the Pets in Space anthology series is pets. When we go to the stars, I guarantee we're taking our pets. And if we find alien life forms, we'll probably try to make pets of them, too. ;-)

This year's anthology is EMBRACE THE PASSION: PETS IN SPACE 3, and I'm thrilled to be a part of it. My story in the anthology is CATS OF WAR, which I wrote to mollify my cats. Pet Trade, the story I wrote for last year's anthology, featured several cats (and dogs, and birds, and weasels, and… you get the picture), but a *dog* was the hero of the story. So CATS OF WAR stars two extraordinary cats.

In my Central Galactic Concordance space opera series, the future genetic designers who created the “cats of war” took features from several species, but mostly felines, to create stealthy spies and thieves, which cats naturally excel at.

I love the creativity of this whole anthology! And it makes sense to take all those stealthy parts of cats and make them come alive.

I asked Carol to also supply an excerpt, so here's that as well.

The standing white-legged boxes for the container gardens looked bigger than she remembered them from her first-day tour. She skirted around to the left, under the hanging tree branches. Slower, fatter raindrops drummed on her hood.

The closer she got to the corner of the fence, the more she became convinced she had visitors in her mind. Not telepaths, because they used words, and not empaths, because they were all about feelings. The two thought patterns were lost, and cold, and hurt. They’d called and called, and finally found someone to hear them.

Great, now she was dreaming while awake in the middle of a rainstorm.

She aimed the torch for the dark hulk that had to be the repair bot. Sure enough, there were Oran Mòr’s orange stripes.

It turned its head, opened its eyes, and meowed softly.

Ferra nearly stumbled to her knees. The torch dropped to the ground and winked out.

A creature rose to its feet and shook water everywhere.

A picture blossomed in her mind of another dark catlike creature, waiting in the dark beyond the fence, unable to fly over it because of a broken wing.

She lit one of the small hand lights on her wrist. The creature in front of her stood knee-high at the shoulders and had the hint of an orange-striped bat-type wing folded flat along its side.

“You’re real.” It was all she could think to say.

The creature switched its long tail in annoyance.

Once again, the image of the injured creature flashed in her mind.

She’d never imagined sentient animals, not in her wildest dreams. It was too cold and damp to be a dream. And too cold and dangerous for an injured creature to be stuck outside.

Sentient animals are also something I like in my own books, so this is right up my alley and will be familiar to my readers too! 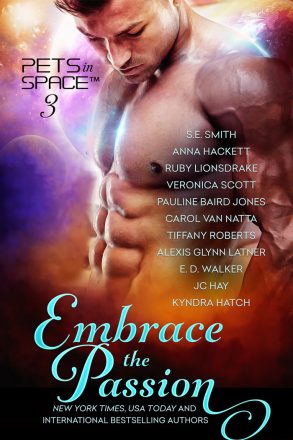 Proud supporters of Hero-Dogs.org, Pets in Space™ authors have donated over $4,400 in the past two years to help place specially trained dogs with disabled U.S. veterans and first responders.

Open your heart and grab your limited release copy of Embrace the Passion: Pets in Space 3 today!

Want to learn more about Carol Van Natta? You can find her online here…