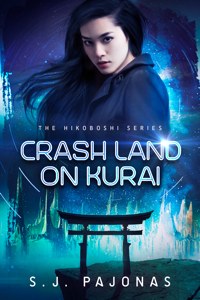 My mom was the first person to hand over a science fiction book to me.

I remember that moment when she produced CHILDHOOD’S END by Arthur C. Clarke and said, “I think you’ll enjoy this.” I was already a Star Trek and Star Wars fan, so she knew what I was into. She understood my need to dream amongst the stars. And that book? It was the beginning of a beautiful relationship.

Growing up a child in the 80s and 90s, I spent a lot of time in the library. I can still see in my head our two local libraries, the two places I spent the most time pouring over every book in the science fiction section and hoping for something new to pop out at me. No science fiction book was safe! I read the blurbs on the back cover, and I paged through the first chapter. Each trip, I took home at least three or four books and was back in a week for more. I even joined the Science Fiction Book Club and looked forward to each book sent to me. My appetite was insatiable.

So it came as no surprise to anyone when I started writing my own science fiction series, The Nogiku Series and The Hikoboshi Series. The advice for most authors is to write what you want to read, and I wanted more adventures in space, preferably with women at the helm. Because you know what all those stories I read as a kid lacked? Women. I rarely saw a three-dimensional woman, someone I could look up to. Yet, those stories still grabbed me, despite the lack of role models. Since deciding to write my own series, I have focused on women while still paying homage to the great authors who came before me.

The series I’m writing now references two of my favorite science fiction stories from my childhood: Phillip K Dick’s BLADE RUNNER/DO ANDROIDS DREAM OF ELECTRIC SHEEP? and Isaac Asimov’s Robot Series, THE CAVES OF STEEL, THE NAKED SUN, and THE ROBOTS OF DAWN. With androids on the loose in the Hikoboshi Series, it seemed proper to access the classics and use them to guide me. But I thought, “What if my worlds had never read those books? What kinds of things would they do the same? What would they do differently?”

So I took two paths and made Blade Runner my “positive” guide and The Robot Series my “negative” guide. With lifelike androids who were so human they needed to be tested, the Blade Runner model pushed the story along for my heroine, Yumi. She could never tell who was human, who was android. And her Blade Runner hero, Rin, would devote his career to figuring out the difference. Choosing the opposite of The Robot Series model, the Hikoboshi androids would have no rules or laws that they operated by. It would lead to chaos and upheaval… until the two models could be reversed and go in the opposite directions at the mid-point of the series.

As someone who loves a good plot twist, this model has been a lot of fun to work with! And I’m sure I’m leaving readers with lots of questions and looking for answers that I look forward to answering as the series progresses. And of course, I’m enjoying referencing my favorite stories from my childhood.

What are your favorite sci-fi classics? Have they influenced your choices of current science fiction to read? Tell me all about them in the comments.