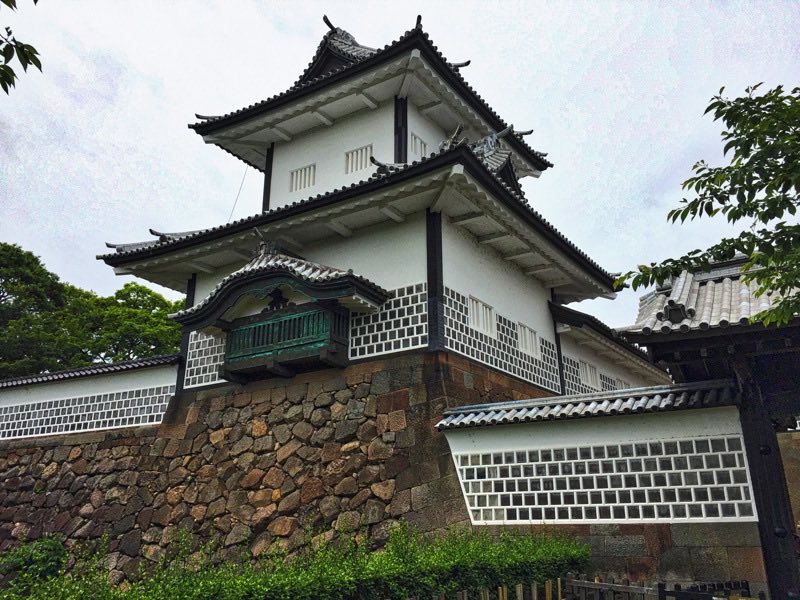 I had one day in Kanazawa, Japan to see all the major sights, so after I was done wandering around Nishi Chaya and the Teramachi district, I walked along the river, got back on the Left Loop bus, and made my way over to Kanazawa Castle. 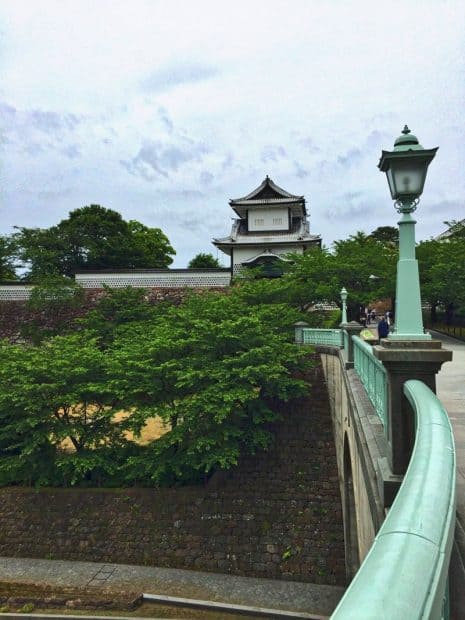 According to Wikipedia, Kanazawa Castle was built by Sakuma Morimasa and was in use from 1580-1871. It's also partially reconstructed. There are two main portions of the castle: the castle and its grounds, then the huge Kenroku-en Garden which is across the street (I did not make it to this garden) and served as the outer gardens to the castle. This castle was ruled by the Maeda Clan for 14 generations. If you have read my Nogiku Series, you will know that I used the Maeda Clan in those books as one of the ruling families in Nishikyö.

I was really fortunate to visit the castle when it wasn't too busy. Most of the areas in the castle park were quiet and not crowded with school groups. I think the best day to go sightseeing in most of Japan is when it's cloudy and threatening to rain. I still got a sunburn this day though! (Because I'm special.) 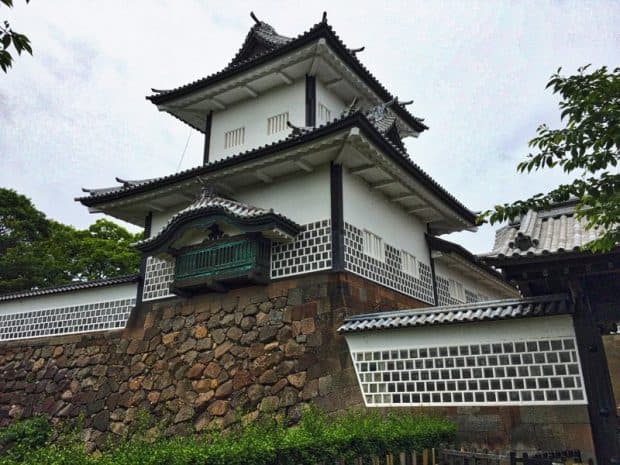 I didn't go into the castle proper (I don't even know if this is possible) because I spent so much time wandering around the grounds that I was starving by the time I was done. When you enter the grounds there are a few different ways you can circle around the castle. I went to the right and down the hill first, before deciding to go back up the hill, and circle to the right of the moat. 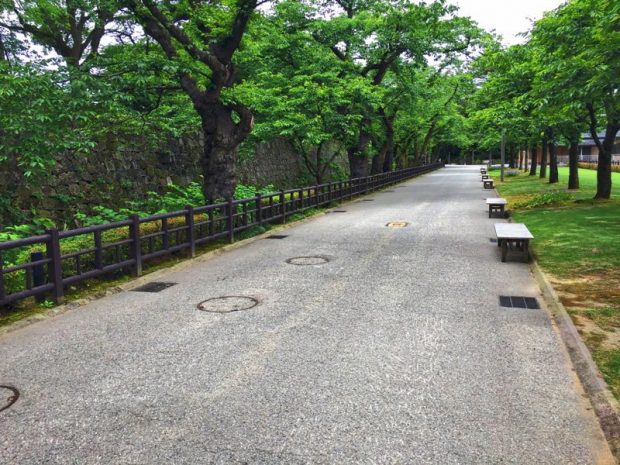 I love this path alongside the moat. It stretched out in perfect symmetry to the side of the castle, and at one point, for several minutes, I was the only person there (you can see this in the video below.) 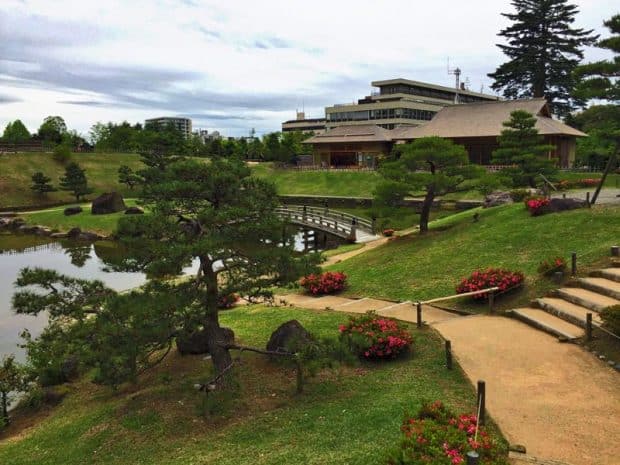 But one of the best parts of the park is the sunken garden, Gyokuseninmaru Garden. It's way down a hill to the back of the castle, and if you don't look at the map, you wouldn't even know it's there. I caught my breath when I saw it, and I'm sure I uttered a shocked, “Wow.” With little rolling green hills, a mini-lake and bridge, and a tiny waterfall, this garden does what all good Japanese gardens does, it mimics the terrain of Japan. This garden was added during the restoration of the castle in 2015. 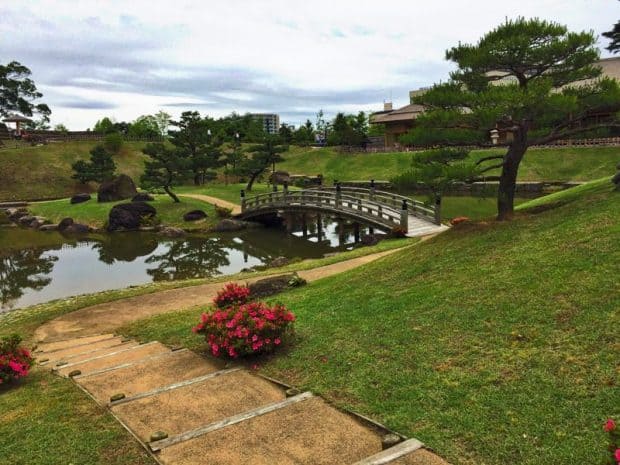 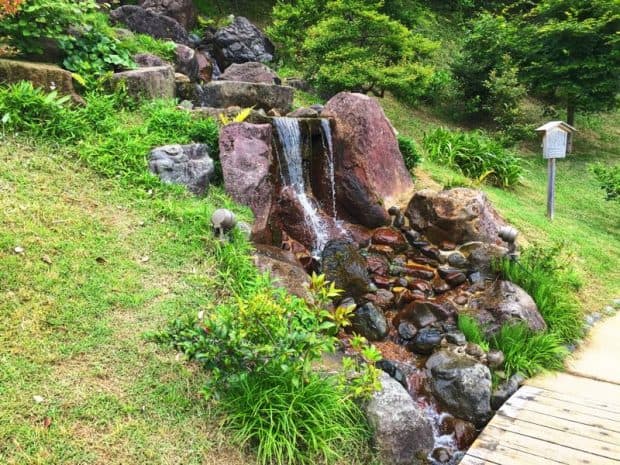 An older man was just past this waterfall, painting on a canvas. I wish I had gone over to see what he was painting, but I left him alone. 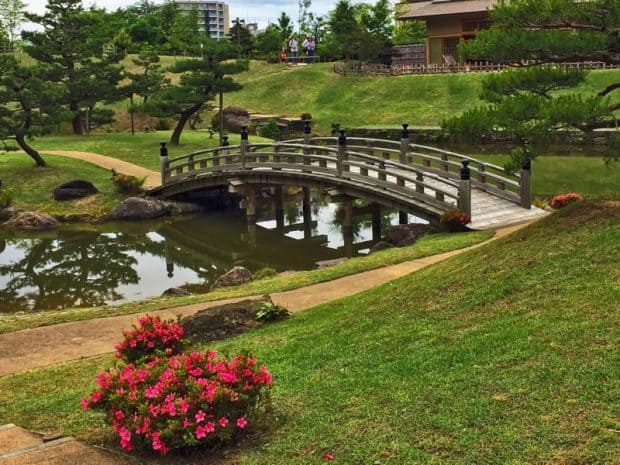 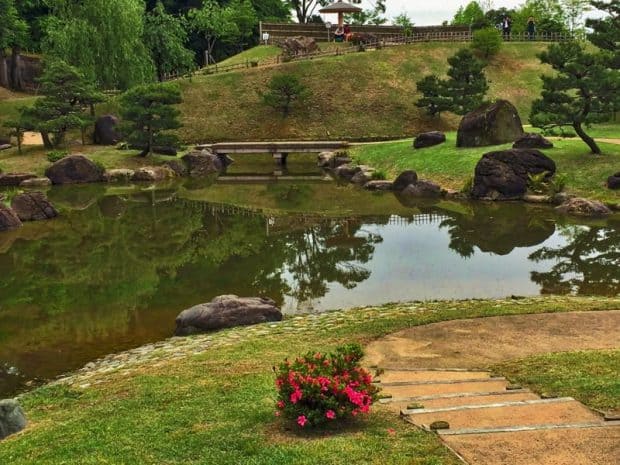 This was such a beautiful place! I spent a good amount of time taking deep breaths and really feeling the serenity of a garden like this. If I lived in Kanazawa and needed some peace, I would come here all the time.

Want more of the Kanazawa Castle and grounds? Check out this walking video I made of the place.

Coming up next week, we'll take a walk through Higashi Chaya, the other geisha district in Kanazawa, and a land that time forgot. 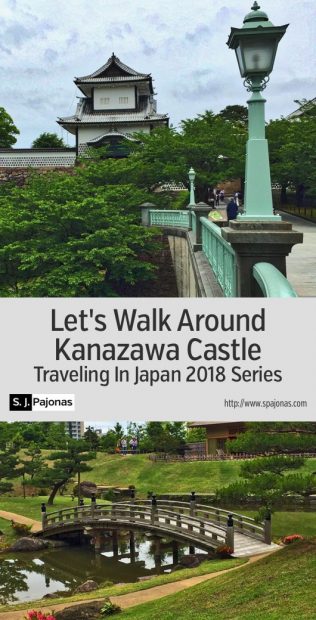