If you're on my mailing list, you already got this information last week! The next book in the Miso Cozy Mysteries Series is on its way! Right now, it's being read by my trusty team of alpha readers and my critique partner and then it just needs a copy edit, proofread, and then it's ready to go!

In THE DAYDREAMER DETECTIVE OPENS A TEA SHOP, things start out really well for Mei and Yasahiro. They've worked hard to get Mei's dream of a tea shop for the elderly up and running. Mei is painting again, helping her mom around the farm, and they're about to leave on a relief trip to help earthquake victims in the south of Japan. But of course Mei's luck turns bad and Amanda returns to Yasahiro's life, ruining pretty much everything.

This was a hard book to write because it really puts my characters through some tough times. The story introduces a few new characters and ushers in a paradigm shift for everyone. I basically turn everything upside down, shake, and see what falls out. While fun, it was also very challenging. Hopefully you all enjoy it. 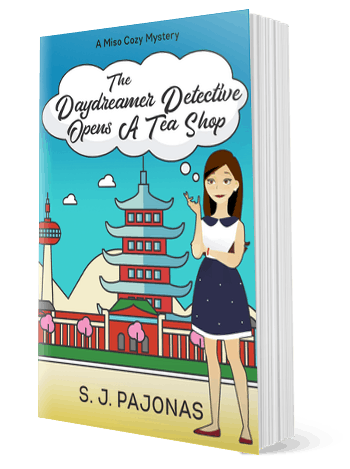 Mei Yamagawa’s bad luck is almost at an end. Her tea shop is a week away from opening, she and Yasahiro have planned a trip away, and the future is looking bright and hopeful. But when Yasahiro’s ex-fiancée, Amanda, shows up unexpectedly, demanding his time and presence, all of their plans dissolve. Amanda is tough and drives Mei up the wall, so it’s no surprise when Mei tells her to get lost, only for Amanda to be murdered a few hours later. Yasahiro becomes the prime suspect, and Mei must put everything on hold to help free him.

Following Amanda’s past through her digital footprint, Mei uncovers secret lovers, shady business deals, and the biggest secret of all, why Amanda and Yasahiro broke up in the first place. With everyone turning against her and the case under media scrutiny, tracking down the killer becomes an obsession Mei can’t give up. There’s no turning back, though, because solving the murder means getting her life back. Not solving it means losing everything forever.

Want to read the first chapter? Check it out on the THE DAYDREAMER DETECTIVE OPENS A TEA SHOP page!

I plan for this to be available some time in late February or early March. I AM NOT PUTTING IT UP FOR PREORDER. Something is going wrong at Amazon right now, and I don't want to get caught in the middle of it. I know at least a dozen people who have been ruined when Amazon either delivered a draft file to their readers OR delivered a kindle file that wouldn't open. All these people did preorders. Amazon changed the preorder system in November and it hasn't been the same since then. I'm not chancing it with preorders anymore. :(

I promise that once the book is out, you'll hear about it here and on my mailing list. Please sign up in either place to get the news!