How I Eased Into My Trip To Japan – Day One 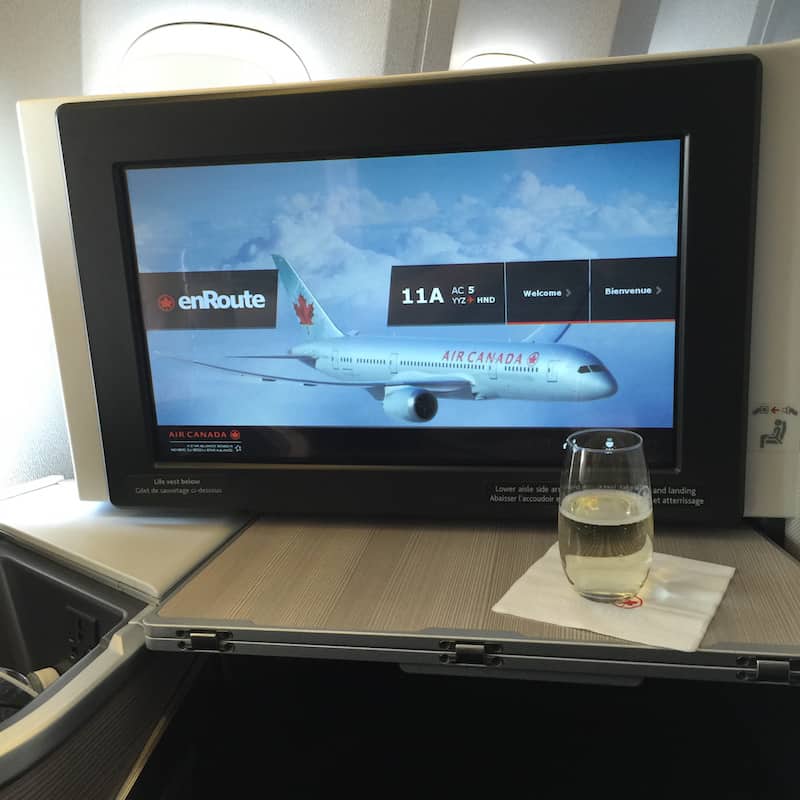 As many of you know, I went to Japan on August 19th and stayed for about 8 days. The night before I left, I was really nervous. I kept second-guessing my decision to go. I was getting ready to get on a flight (two, actually) and fly half-way around the world to be away from my family for eight days. Was I crazy? Just a little bit. But my heart yearns for Japan almost every day. I often say that I think I was Japanese in a former life because nothing feels so familiar to me like Japan does. My friend, Jen, is the same way, and I'll talk about her a little more later because she's the one that picked me up when I got there.

I got up super early (5AM) on the day of to catch my first flight to Toronto from Newark at 8AM. I kissed my kids goodbye in their beds and a car service drove me to the airport. I had no problems checking in, which is a miracle, because I was flying business class via Air Canada. Business class is awesome, but Air Canada doesn't have a lounge at Newark so I stood in a long line to get breakfast from a deli in the terminal and then waited to board my flight to Toronto. The flight itself was smooth. Business class rocks and I got another breakfast on my way there! 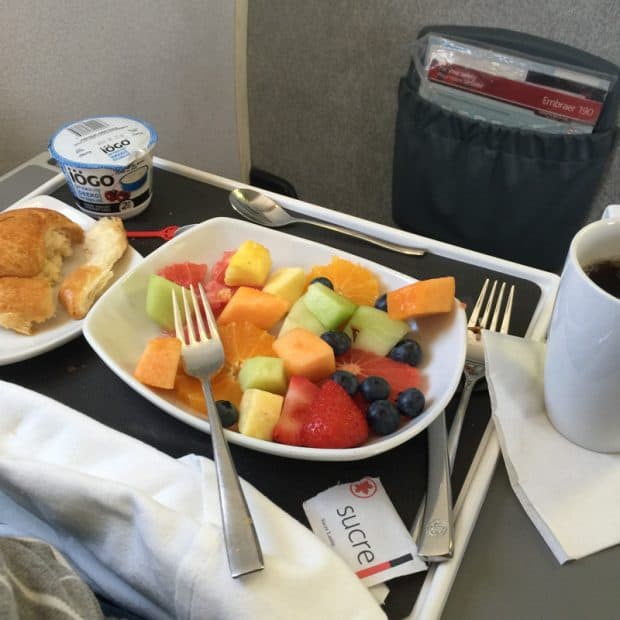 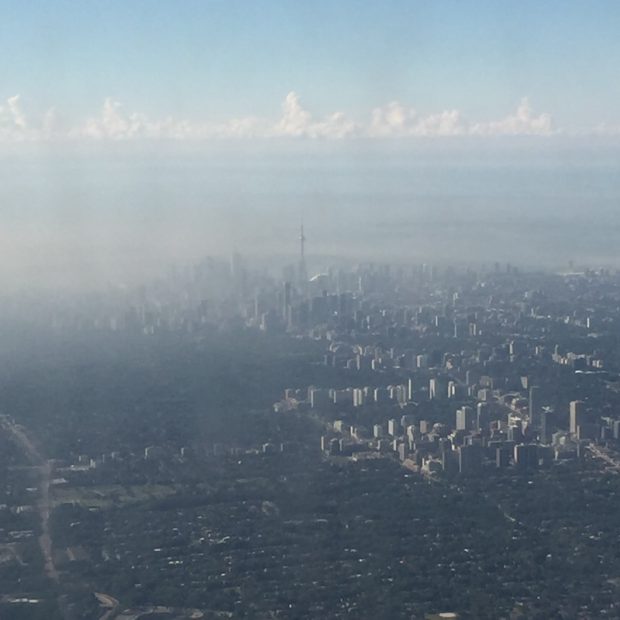 Flying into Toronto was easy peasy. Once we landed, I had to walk a long way and then be shuttled through immigration before I could move on to my next leg of the trip, but the staff at the Toronto airport were nice and super helpful. I definitely felt the Canadian hospitality.

Once I was cleared, I went straight for the Air Canada lounge. Toronto is a hub for Air Canada so I was sure the lounge would be good, and it was. I had a nice seat in which to relax, get on my computer, and knit and eat. 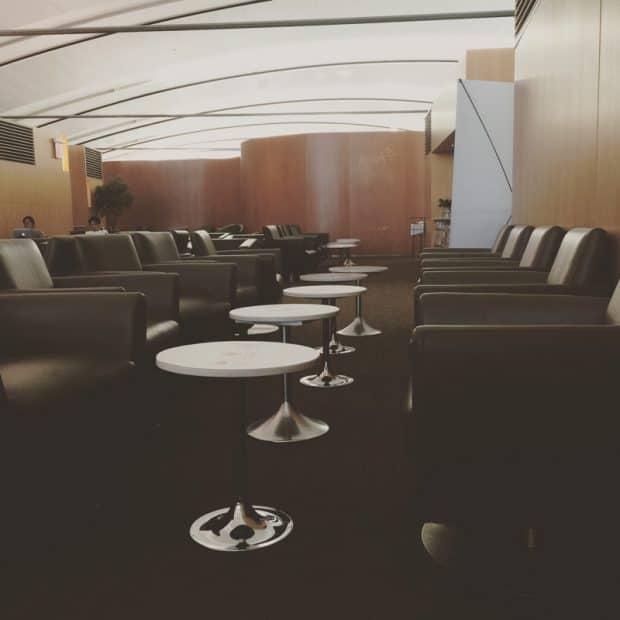 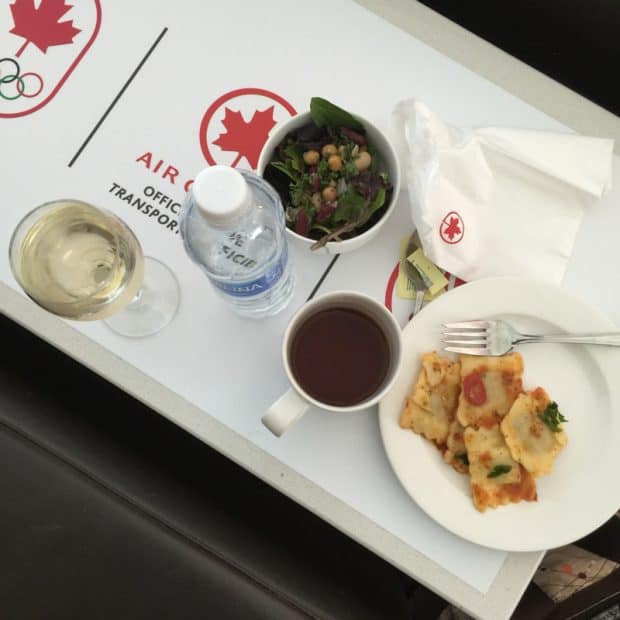 The food was pretty good, and they all the free booze you could want too. FREE BOOOOOZE. I had wine with lunch. Of course.

Then my next leg of the trip was a long flight, about 10 hours. But once again, I flew business class (I know this will be repetitive, and I apologize) and I had this cool spot for the entire trip. 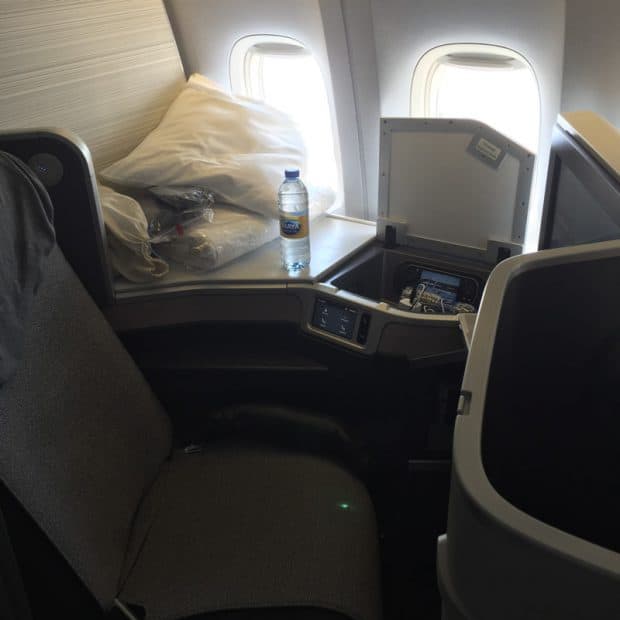 You can LAY FLAT in these babies! Plus all the food and drinks you desire. To say I was spoiled on this trip is an understatement. Most people ride in coach and barely sleep. This is luxury. 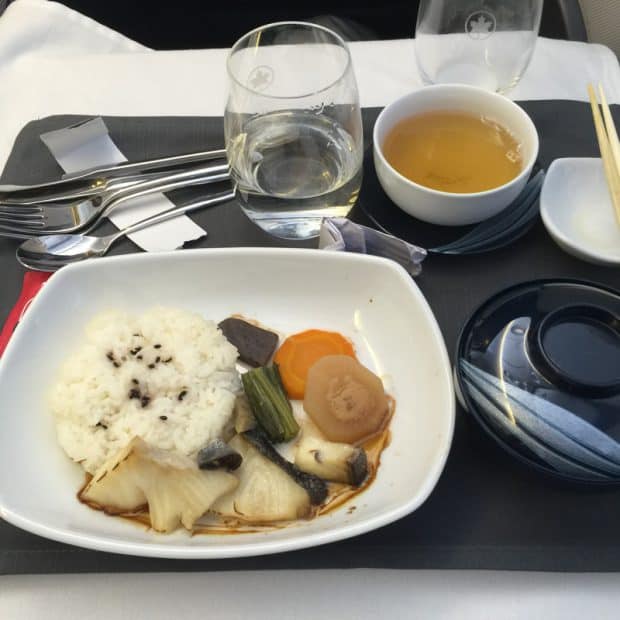 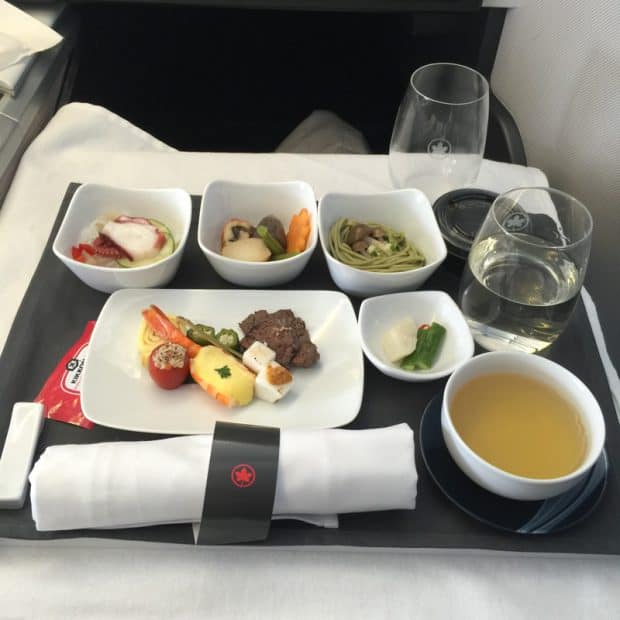 These were the only photos I took during the actual trip, of the food, of course. I spent the time listening to my audiobook and knitting, reading, and watching movies or sleeping.

Near the end of the plane ride I was feeling kind of ill. I think it was a combination of nerves and having too much alcohol on the trip. But I knew that as soon as I landed, I would be okay.

I landed at Haneda airport which is technically in Tokyo, instead of at Narita, which is a 45 minute train ride out of the city. I breezed through immigration again and my awesome friend, Jen, picked me up with her family and drove me to her place. It was so nice to be greeted by a smiling face that I knew, and I immediately felt better as we drove through Tokyo. I felt at home again, so excited to be drinking in the sights and sounds of my favorite place on earth.

We changed at her place and then all got on the train to go to Elizabeth Andoh's house which was about one ward away. If you don't know Elizabeth Andoh, then you should! She's a chef and teaches classes in Tokyo. Her cookbooks are well-known and lauded throughout the Japanese food community. Here's her Amazon page if you're interested. I was really excited to meet her and Jen is friends with her and works with her, so I felt honored to be brought along. 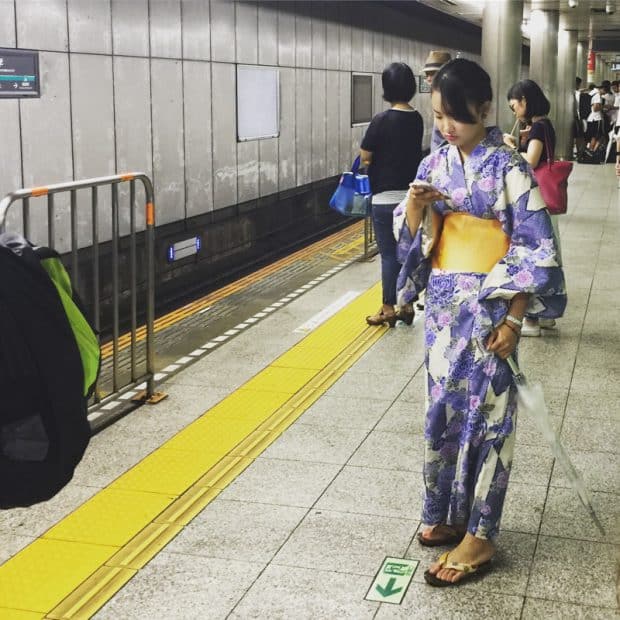 Lots of people were dressed up for the fireworks that evening! 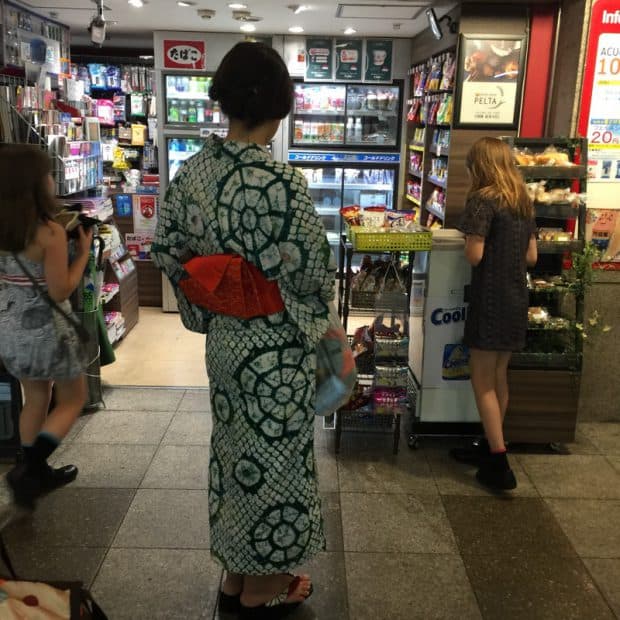 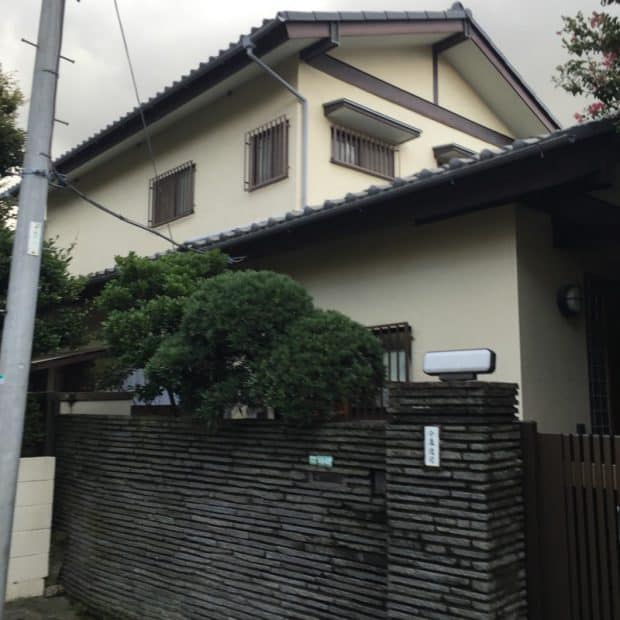 I love all the Japanese houses in Jen's neighborhood!

Jen lives in Meguro and Elizabeth lives in Setagaya so we took the train and then walked in the warm rain to get there. Remember that I had just flown halfway around the world and was now trekking all over Tokyo. It was fun but I was exhausted and sweaty when I got there. Lol. We stopped at a convenience store along the way to get umbrellas and drinks and I snapped this photo of the onigiri rice ball snacks. God I love Japanese convenience stores. THE ABSOLUTE BEST. 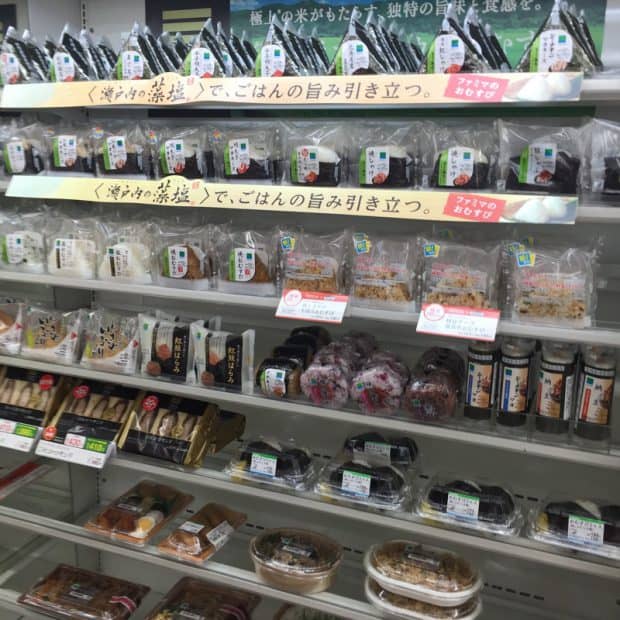 I talked to plenty of people that night, including several ex-pats. I'm just outgoing enough to do parties like this, though not very often. There was a super funny point in the night where Jen and I were talking and a Japanese teenager, maybe 15, saw us and his eyes lit up. He then beelined across the room to us and proceeded to test his English on us. Lol. It was cute and we did our best to have a conversation. I was happy for him that he gave it a shot. It's so hard to speak a foreign language!

Since Elizabeth was hosting, the food was delicious and fresh. I ate as much as I could. My body had no idea what time it was or where I was, so I just decided to feed it food and alcohol and hope for the best. 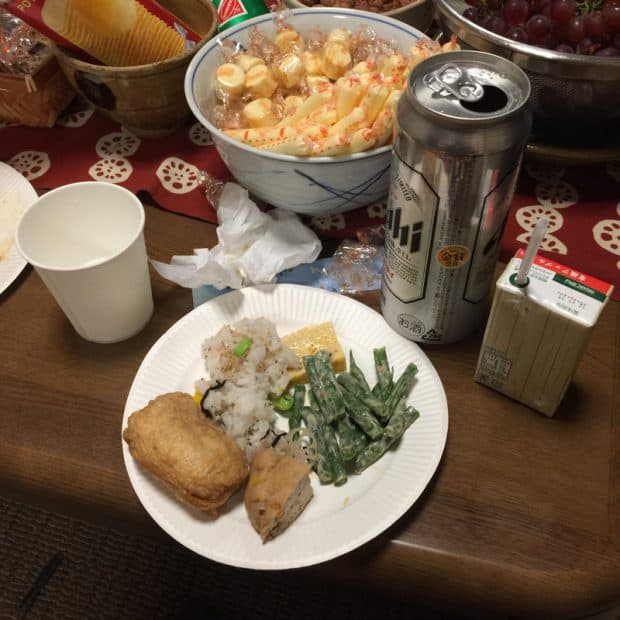 The fireworks started not long afterward! And we watched from Elizabeth's porch.

By the time 9PM rolled around, I was toast, and I still needed to get to my hotel. Jen and her family got me to Shibuya on the train and then I got a taxi from there to my hotel in Shinjuku, Nishi-Shinjuku, to be exact which means West Shinjuku. I stayed at the Hilton Tokyo there, which was really nice, and it turned out it was the perfect location for my week there. There was a Metro station a two block walk away that I could use to access all parts of Tokyo, and there was plenty to do in Shinjuku as well.

I made it to my room, showered, got in bed, and passed out. Not a bad start to my trip!

Next up: a day spent in Shinjuku shopping and walking around.