Okay, let's do a writing update. I've been making a lot of progress on my current novels, and now that it's 2016, it's time for me to set my publishing dates for the year. As some of you know, because you been following my blog for a while, I've been working on a cozy mystery series. Between October and the end of November, I wrote the first book in the series. I took a week off and then got started in the second book of the series right at the beginning of December.

Just yesterday, I crossed the 70,000 word mark on book two of the series! I'm in the home stretch, only another 5000 to 6000 more words to write. In fact, I think I only have three more scenes to write, so I will come in just under 80,000 words for this novel. It's been a long road, especially keeping my word counts up during the holidays. It's not easy to write when everybody is home in my house, and I struggled with getting the words in everyday. Many days I plain did not write, but that never lasted more than 24 hours. Now, I'm right on track to finish before my birthday on January 18th (I may even finish this weekend!) 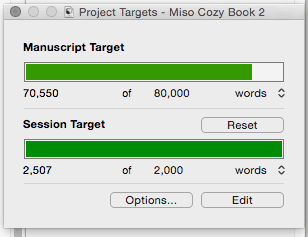 There's a little hint here at the subtitle of this series!!

I really love the series so far. My main character, Mei, is a joy to write. She's a bit down on her luck, and she has a hard time accepting when things actually go her way (she denies it to the sky and back). She’s sweet and kind and cares about her family and friends, but she's also very complex, willing to lie or suppress the truth if it helps others or gets her into situations where she can find clues to who the murderer is. She’s a good actor. Lol. I'm really enjoying writing her. Plus, there are a lot of great side characters in these books, best friends, friends of Mei’s mother, and, of course, a love interest with a very public past. Mei contrasts really well with the love interest. He's a successful guy who’s fought hard for everything he’s earned, and she's been anything but successful. I like to see the way they interact. She challenges him and he challenges her. They’re a lot fun.

According to my schedule I can take a week off when I'm done writing this book. Then I need to quickly edit the last short story I wrote (which was forever ago). This is another Kami No Sekai short story that had a great idea, but was missing something. I talked it over with my critique partner, Tracy, and we figured out the missing piece, so now I have to fix it. I then need to plot the novella that I plan to publish in December. This novella is part of a huge scifi shared-world series. Lots of authors are participating and writing their own stories within one shared world. It’s really fun, and will be a one-off, so I’m excited to see where it takes me. We'll see if I get around the actual plotting though, because January and February are not usually my most productive months. I'd like to at least have a solid idea of what to write before I start edits on the first cozy mystery.

Working almost every evening while my husband plays PS4 and the kids are in bed.

Also, I plan to reveal the covers and titles for book 1 and 2 of the cozy mystery series before the end of January, but I won't put up the preorder for the first book until late February. The covers are a flat illustration style using sillouhettes for my main character. Do you have any idea how hard it is to find a good illustration of a Japanese woman without the clothes being all wrong (usually Chinese) and not overly sexualized? VERY HARD. If the novels do well, I may get custom illustrations done in the future, but right now, I like what I have going, and I need to save money in the first part of this year. I'm aiming to publish the first book in April, publish the next short story in June, and publish the second cozy mystery in July. After that my schedule is a little hazy, assuming I get everything done.

I have a lot of work ahead of me. I decided to write the cozy mystery series in present tense for the first draft and then revise it to past tense in the second draft. This means I'll do at least three drafts for every book. Which is good, I suppose, but it makes for a shorter reading time for my critique partner and beta readers. If only I could write the books in past tense the first time, but that's proving to be very hard for me. What can I do? Maybe with time I'll be able to change that.

So that's what's going on with me and my writing! I have more words to write today and over the weekend. And you have plenty more books to look forward to! :-) See you all soon!