A Love Affair With Heroes

For today's guest post, I bring you something entirely different! As you know, I write science fiction romance from the female's POV and also in first person present tense. Rachel Leigh Smith is my exact opposite! If you've always loved the hero's story, then you'll want to listen to what she has to say here :)

Science fiction romance is a genre known partly for its emphasis on strong, capable heroines. But I’ve marched to my own beat my whole life, and my writing is no different. The heroine of a romance is never my favorite character. I never invest in her, I rarely care what happens to her, and I don’t really want to be stuck in her head for chapters at a time. And don’t get me started on first-person in a heroine’s head.

When I started writing science fiction romance in May of 2012, I actually had no idea it was a genre, much less that it was known as a place full of strong heroines. Not that it would have stopped me… 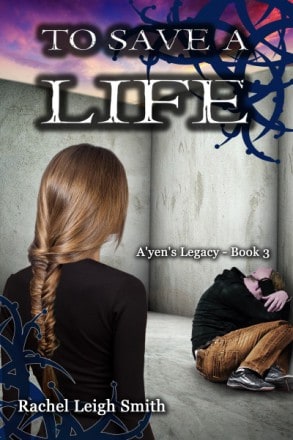 You see, the hero is always my favorite character in a romance. I want to be in his head the most, I want to get to know him at the deepest level, I want to watch him fall in love through his own point of view. For me, there’s just something magical about a romance hero, about watching him come to terms with the fact she completes a part of him he’s been ignoring his whole life, and that she inspires him to achieve more than he ever thought he could.

I’ve been creating characters and writing about them for almost twenty years now. The men in my head outnumber the women by at least ten-to-one. I have everything up there from professional football players to soldiers to musicians to my alien men in A’yen’s Legacy. My entire imaginary life revolves around heroes.

My novel creation process goes something like this: Hero walks into my head, tells me his name, sits down, and then tells me his life story. I make lots of notes as he’s talking to me. Then I start looking around for his heroine. Getting her to open up takes serious work, and I never feel like I know her as well as I know him.

I spent a few years trying to cram myself into the heroine-centric box. All I did was make myself miserable and produce work I wasn’t all that proud of. When I started writing SFR, I gave myself permission to ignore any and all genre boxes and expectations and write the story exactly the way it wanted to be written.

It was the most freeing experience of my life. I found my place in the romance world, and I feel like I can fly over Mount Everest now. Giving myself that permission unlocked a well of creativity I knew was in me, but I couldn’t access it. Since May of 2012, I’ve finished five novels. All of them centered on the hero, and all of them over 100,000 words. I’m closing in on my sixth finished novel right now.

I’m not totally sure why I latch onto heroes the way I do. It may have something to do with what I read as a child, and the fact I inhaled The Hardy Boys before I discovered Nancy Drew. Frank Hardy was my first book boyfriend. It might also have something to do with the fact I hung out with my boy cousins, and preferred playing with boys. I didn’t have the time or energy to deal with girl drama. Still don’t.

I’m also not your typical girl. I’m very strong-willed and independent, I’ve always blazed my own path, and I don’t care what anyone thinks about me and my choices. Nor am I overly emotional. I feel things deeply, but I tend not to express it. If I’m crying, it’s a sure sign I’m beyond upset and really torn up about something. All of those things make it a lot easier for me to identify with a male character over a female character.

It’s been a wonderful journey discovering this genre that has room for me to be myself and write the types of romances I’m dying to read. No matter what romance sub-genre I dabble in, you will always find one thing—it’s the hero’s story, and she’s along for the ride.

TO SAVE A LIFE (A’yen’s Legacy #3)
Release Date: May 4, 2015
Category/Genre: Science Fiction/Paranormal Romance

A’yen's loved ones are under attack. To save them, he'll risk everything.

Half the Lokmane are free and the resettling of Lok’ma is in progress. A'yen is crowned king, but it isn't stopping his enemies. Someone is after Ro, and the woman he's falling in love with is caught in the middle.

When Fae is injured in a cave-in at a dig site, A'yen knows who’s to blame. Proving it is the hard part. Things get worse when he walks into a political trap, and Ro is framed for murder. Saving his reputation is easy compared to saving Ro. Ro’s demons come for him, taking him back to a life not worth living.

A'yen races to save Ro before he can act on his deepest desire: killing his tormentor. Happily ever after can't happen if Ro is dead. 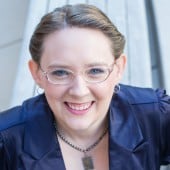 Rachel Leigh Smith writes romance for the hero lover. She lives in central Louisiana with her family and a half-crazed calico. When not writing, which isn't often, she's hanging with her family, doing counted cross-stitch, or yakking about life, the universe, and everything with her besties. There may also be Netflix binging…

She's a member of the Science Fiction Romance Brigade and Romance Writers of America.