The Illaran Culture from BOUND TO YOU

For today's guest post, A.R. DeClerk has stopped by to talk about her upcoming science-fiction romance novel, BOUND TO YOU.

When Jackson Baine and Anatolia Bernardi first come to the deserted planet labeled V-097 they have one goal. Find out why nearly one hundred people on a terraforming crew disappeared. Verify the safety of the planet, and turn it into an oasis for Ferrell Terraforming Inc. What Jacks and Lia discover is that the ancient city buried under the dirt on V-097 is still inhabited by the ghosts of the people who once lived there. 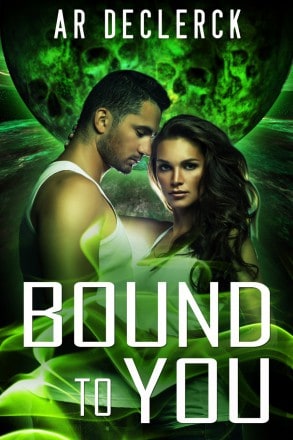 Who were the Illaran people, and what happened to them?

Illara was a planet much like Earth. It was covered in fields of green grass and forests of tall trees. Cities teeming with life and prosperity sprung up and for thousands of years there was peace. The Illarans traded with the Ritarians, the people who inhabited the next closest planet at this far edge of the December Quadrant. They had a peaceful relationship, and life was good for the Illarans. At the end of a great era of scientific discovery it became clear to the Illaran leadership that their energy resources were dwindling. A dark time was approaching the highly civilized peoples of Illara. Scientist went to work to try to discover some new and sustainable way to keep their people alive. A miracle appeared in the sky. A wormhole, glittering with beautiful color on the horizon. Fascinated the scientists discovered that the wormhole emitted an energy that was both boundless and clean. A cry went out over the surface of the planet, A NEW FORM OF ENERGY HAD BEEN DISCOVERED!

The energy, called Verhagnis, was piped to every home and into every building through a planet-wide energy circuit. Life returned to normal for the Illarans as all their worries about the future drained away. No one noticed that occasionally a husband would murder his wife. A mother her children. Some incidents of madness were to be expected in a large population, after all. Then, a wave of violence erupted. The evidence was undeniable as one common thread emerged. The sick would eat the victims. Doctors rushed to assure the public that nothing was amiss. Some contaminant or another was discovered and the evidence of what was really happening was swept away by bureaucracy. As small towns were quarantined, the largest cities began to report similar incidents. Crazed individuals were reduced to an animalistic state, murdering and killing their families and strangers alike.

As with any uncontrolled pandemic, all hell broke loose. The government holed up in the capital city as all around them madness and panic ensued. A family of scientists began to realize that the new energy they’d pumped in from the wormhole was the cause of the illness. They fled the city for tunnels underneath, building a giant lab to find some way to combat the virus that turned their people into monsters. Above them on the surface the Ritarians tried to aid their friends the Illarans, only to be turned away or savaged themselves. As the Illaran people turned tribal and vicious, the Ritarians feared for their own people if the virus should ever escape Illara.

The family spent two years in the lab as the people on the surface grew increasingly unstable. At last they sent out a signal to the Ritarians, a possible solution had been found. Unfortunately, the Ritarians’ reply was this: any who are immune will be taken. The rest will burn. As the family rushed to escape, the Ritarians dropped a tectonic bomb on Illara, destabilizing the planet’s crust and erasing all evidence of the Illaran people forever.

Jackson Baine was a man with a gift, and he had no trouble selling it to the highest bidder. His newest job was for one of the biggest terraforming companies in the universe, and the money he stood to make would be enough to buy retirement for him and his crew on any planet in any galaxy they chose. His problem? Ferrell Terraforming Inc. has assigned him a company liaison, whose primary goal is to make his life a living hell. His only option is to agree to take her on, or he loses the contract. And that’s not his only problem. Lia Bernardi is smart, beautiful and just enough trouble to turn his head like no other woman ever has. Their attraction is a distraction he cannot afford.

Anatolia Bernardi wants to climb the corporate ladder, get out from under her irritating boss, and finally impress her overbearing father. All she has to do is turn one dead, empty planet into an oasis. The only way she can accomplish that is with the help of Jacks Baine. The man gets under her skin, and threatens to break down every wall she’s placed between herself and the world.

On the surface of an empty planet, far to the edge of the December Quadrant, Jacks and Lia will have to come to terms with their attraction. Sometimes the dead aren’t forgotten, and they have secrets to tell. Only one thing is certain: the past never really goes away.

BOUND TO YOU will release APRIL 24th but is now available for pre-order: 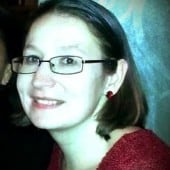 AR DeClerck is a wife, mother and dialysis technician from the Quad Cities, IL. She spends her days helping people live with kidney disease, and her nights writing novels. She grew up in the mountains of Western NC, and she’s an avid reader, reviewer and facebooker. She writes about romance in many sub-genres including sci-fi, steampunk and mythical romances.

FORGED IN FIRE is her first sci-fi romance novel: