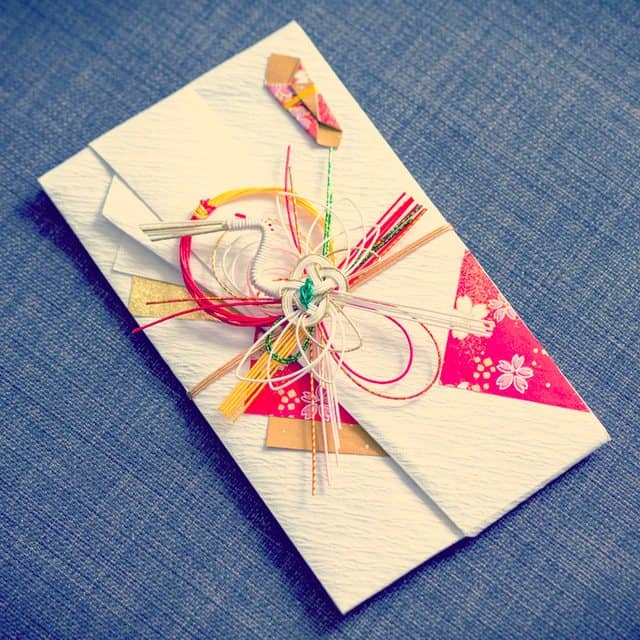 Whenever I sit down to write another book in the Nogiku Series, I first think hard about what new and interesting Japanese traditions I want to highlight in that book. For REMOVED, I introduced a lot of Japanese language and culture but made sure to touch on a few bigger events: New Year’s Eve, swordfighting, Japanese food and the izakaya phenomenon, a geisha party, and then a taiko drumming concert. It was a hard one to beat!

So when RELEASED came before me, I was pleased that one main event would stand out: a wedding! Now, I’ve been a Japanophile for as long as I can remember and when my husband and I got married, I incorporated a few Japanese traditions into our ceremony. Let’s look at a few of the more obvious Japanese wedding traditions and then I’ll touch on the traditions of attending a wedding.

A traditional Japanese wedding kimono is called a shiromuku (“Shiro” meaning white and “muku” meaning purity) and it is one beast of a kimono. I actually own one. I bought it before we got married because I thought it might be fun to get married in one, but I tried it on once and decided against it. They are very heavy, made of silk and usually woven in intricate patterns across the back. Mine has a heron and bamboo woven into it. The hem is unusual as well. It’s stuffed and padded, rounded so that the fabric weighs straight when worn. 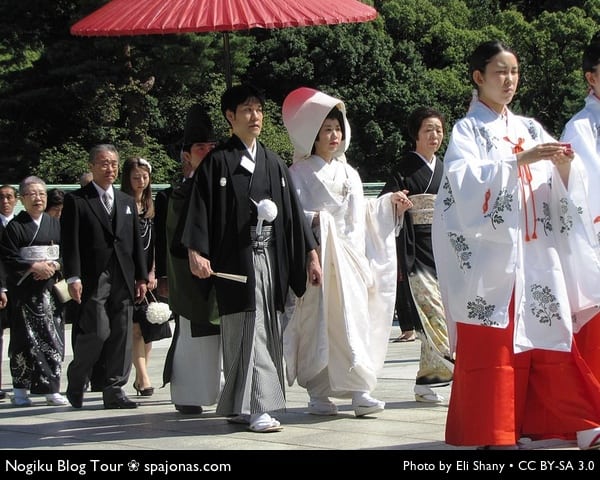 The Dress, The Umbrella, and The Cups

In the photo above, you’ll notice that everything the bride is wearing is white. This is also a tradition symbolizing her purity and her willingness to be dyed the colors of her groom. The wedding hood she wears is the wataboshi and is usually only worn during the ceremony.

The red umbrella is very symbolic of Japanese weddings. The color red in Japan means life and wards off evils and the umbrella itself keeps the bride dry if it happens to be raining. It’s quite large and usually carried by man who follows the bride in a wedding procession.

The tradition of san-san-kudo was a component of my own wedding ceremony. I describe it in RELEASED as:

“One of the temple maidens lays out three cups of different sizes: small, medium, and large. I’m familiar with this ritual called san-san-kudo, three-three-nine times. The tradition is the bride and groom each take three sips from each of the three cups, going from smaller to larger cup, until each has consumed nine sips of rice wine. Nine is a lucky number for couples because it cannot be divided equally in two, and the number three is also lucky because it’s prime. So three, three times, is three times as lucky.”

So the interesting thing about san-san-kudo is that the number 9 itself is considered an unlucky number in Japan. It’s pronunciation, ku, sounds like the word for “torture” or “agony” and it is often omitted from places like hospitals. All Nippon Airways does not use the number either. But in the case of this ceremony, since it’s three times three, it’s different.

I have never been to a Japanese Shinto wedding so, writing about one, I wondered what they were like. I’m so thankful for YouTube! I watched several before I sat down to write the wedding in the book. Here’s a playlist of several videos you might be interested in. (The first one in this list was so beautiful it made me cry. Make sure you have tissues.)

I don’t go into much detail in RELEASED about what guests are expected to do at a Japanese wedding because the event is very dramatic for Sanaa, my heroine, all on its own. But here are a few things to remember if you’re ever invited to one.

If you’d like to learn more about Japanese weddings, read this article on GoJapan.About.com.

Flickr has an abundance of Japanese wedding photos you may enjoy. Here are a few below.

And I have also put together this Pinterest board on Japanese Weddings. Enjoy!

(All images in this post are used under http://creativecommons.org/licenses/by-sa/3.0/deed.en)