Writing About Japan For The Nogiku Series 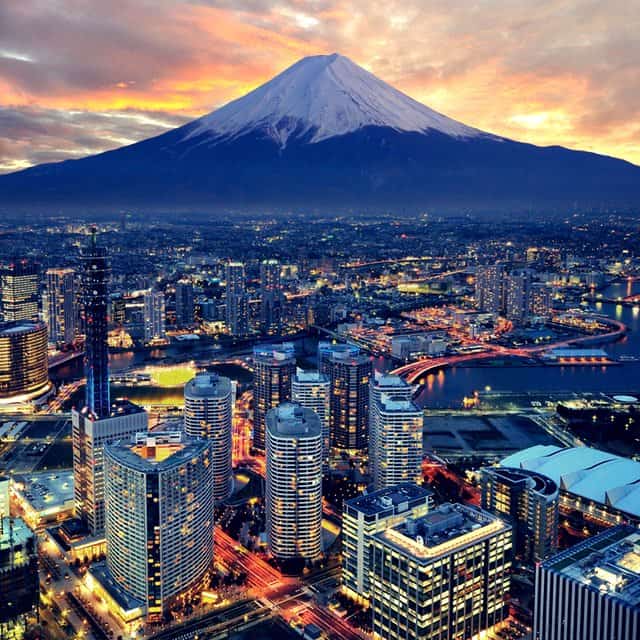 I am definitely not Japanese, though I often joke that I was Japanese in a former life (it's the only way to explain my strong connection to Japan). I have a deep and abiding respect and admiration for the Japanese culture. I have studied Japan (and the Japanese language too, on and off) since 1998, and I consider myself to be pretty knowledgeable on their culture. But I am not Japanese. I never will be.

So what makes a white woman like me think that I can write Japanese characters? Research, and lots of it.

Now, let’s think for a moment on writing anything. Very few authors can sit down and write any story without doing some sort of research. We can rarely rely solely on personal life experience. So, even though I’m writing outside of my race and culture, I would expect to have to do research about anything that I write. It just so happens that I’m writing a very intricate story using a lot of Japanese culture. I sometimes wonder, “What was I thinking when I decided to write this story?” And then I laugh. Because I did have one particular goal in mind when I started writing the Nogiku Series, and it was to educate people on Japanese culture. If you read my books and learn something about Japan, be it a few phrase words or different foods or clothing, that’s good enough for me. It means I succeeded in my goal and taught you something along the way.

Each time I sit down to write a new book in the series, I make a clear set of goals for that book. There are my plot arc goals, individual character goals, and then the Japanese culture goals. Let’s put aside plot and character goals since most authors deal with those in every manuscript.

When I write a new book in the Nogiku Series, I try to do one or more of the following: introduce new Japanese vocabulary, highlight a period of Japanese history, tell a Japanese folktale, educate on a Japanese tradition, or celebrate a Japanese holiday. In most books, I hit all of these goals. For example, in REMOVED, I managed to: introduce a lot of Japanese vocabulary (some reviews are mixed on whether I included too much or too little), highlight Japanese New Year’s traditions, talk about geisha and their occupations, and show off a taiko drumming concert. REMOVED contains even more than this, of course, but these are the higher touchpoints of the manuscript. 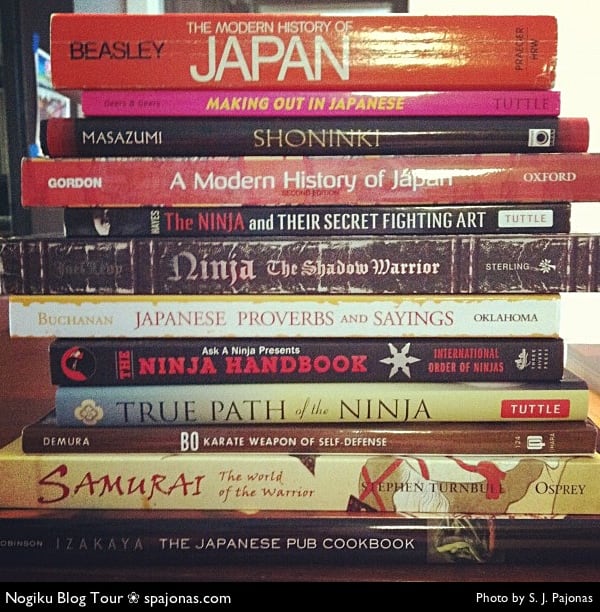 Once I have my Japanese goals set for each book, I research each one thoroughly before beginning my first draft. I use a multitude of mediums for research. First, there are all of the books on Japan I own (a sampling of which are featured above). Each one of them contains references on what I may be looking for, but at best, I may only get a brief sentence or two on the topic.

Once I have an idea of what I’m looking for, my next step is the internet. I find a lot of what I need on Wikipedia and the beauty of Wikipedia is the cross-article linking. Sometimes I know what I want to talk about, like the holiday Tanabata which I feature in RELEASED, but going to the Tanabata article on Wikipedia also brought me to the articles on the two stars, Altair and Vega, that the Tanabata folktale is based on. That led me to new thoughts about where I would take the story!

After Wikipedia, my next stop is usually YouTube. YouTube was where I watched people fight with Japanese weapons so I could get a better idea of the choreography used in fight scenes. YouTube helped me experience the sounds and space of a Japanese temple, and it also helped me understand the basic differences in language between different parts of Japan, the dialects.

But the best research I did on Japan happened seven years before I even wrote the books. My husband and I traveled to Japan in 2005, and it was the single best vacation of my life. I did not want to leave and come home. I felt very welcome and happy there. I took a million photos, we went on day trips, and I soaked in as much of Japan as I could. My husband has since been to Japan in the intervening years and brought back all that he could remember too. I keep all of those experiences locked away and bring them out when I need them for the books. 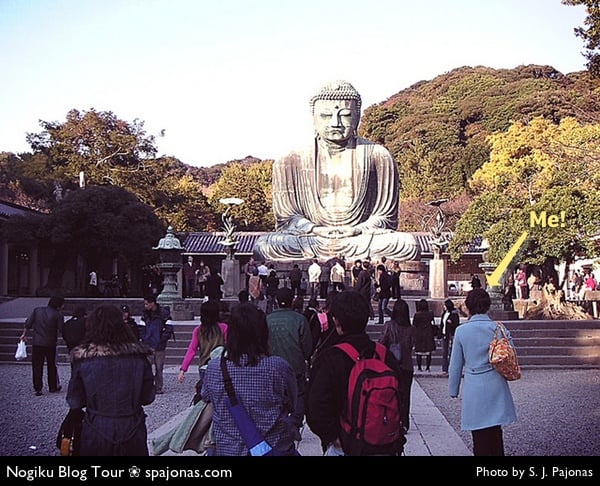 Writing outside your culture

Let’s talk a little about stereotypes. Lots of people denounce stereotypes, right? Because a stereotype can be degrading, racist, and often wrong. But there’s a reason why stereotypes exist! A lot of people fit stereotypes on a superficial level, and they can be a good jumping off point for writing because the best part about stereotypes is booting them. Throwing them out the window. Shredding them to pieces.

What I enjoyed doing in the Nogiku Series was introducing a few characters as stereotypical of Japanese behavior and then showing how they most certainly are not. Take Mark Sakai for example. Mark is introduced as being this hard-as-nails, unemotional, mentor figure, but by the end of the book, we see his loving and caring side, the side that cares for Sanaa, his family, and his duties. And he’s far from perfect too. He’s made a lot of mistakes and has a lot of regrets. He is a whole person, not a stereotype. Knowing the Japanese stereotypes first, researching them and understanding where they came from, helped me write better Japanese characters that both fit and debunked those same stereotypes.

I can’t stress how important research is on any project, but when writing outside of your culture, it’s paramount. I hear from a lot of authors about how they’re afraid to write outside of their culture, that they’ll “get it wrong.” I always tell them that if you do your research about the culture first, you won’t get it wrong! It’s easy to get simple things wrong like kimonos must be closed left over right side or not knowing the holidays because you didn’t research first. Everything after that is just your characters inhabiting the space you’ve provided for them. You build a whole person and then peel off the layers one by one until we, the reader, see their core.

If you’re interested in Japan, too, I highly recommend spending some time on Tofugu.com. Tofugu is a wealth of fun and interesting information about Japan and I have enjoyed reading dozens of their articles. Perhaps they will inspire you as well!