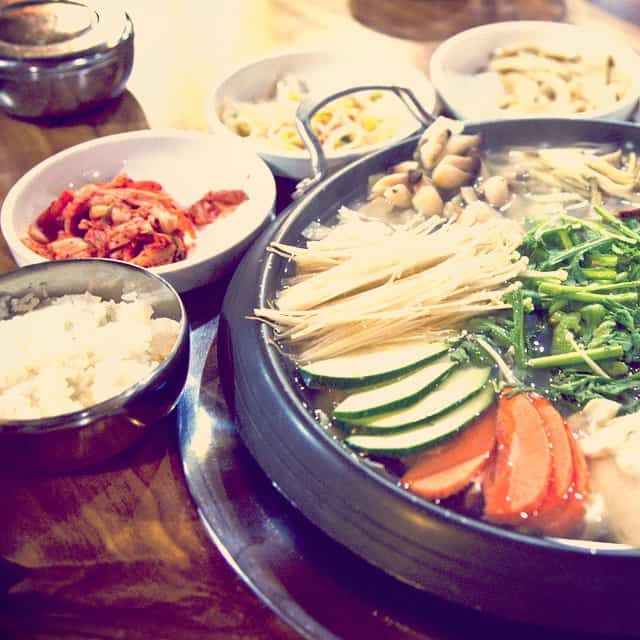 I have this thing about food in books. I have to include it, lots of food. I like to write about food, how it tastes, the different kinds of food people like to eat, and the more exotic the food the better. For FACE TIME, I got the chance to introduce Indian and Korean cuisine into the mix. I wrote about my Top 10 Indian Dishes the other day, so here are the Korean Food Basics everyone should know about.

When I set out to write about the basics of Korean food, I forgot how hungry writing about food makes me. You’d think I would know this by now because every single book I’ve ever written has made me hungry. When I wrote REMOVED and RELEASED (the Nogiku Series books) they were filled with Japanese food and I craved sushi, tempura, and noodles twenty-four-hours-a-day. When I decided to make Lee in FACE TIME Korean, I knew I would have Korean cravings as well. I even bought this great DVD set called THE KIMCHI CHRONICLES (Here are the DVDs) and watched them before I dove into writing FACE TIME.

Food is such an important part of a culture and, for me, a story. First dates usually happen over dinner. Sometimes first kisses happen in the booth in a corner of a restaurant. And food happens to be a very important part of Laura’s life as well. Laura, my heroine in FACE TIME, loves to eat good food, and even wants to learn how to make Korean food. Here’s a list of basic Korean staples that Laura would choose first to understand and prepare. 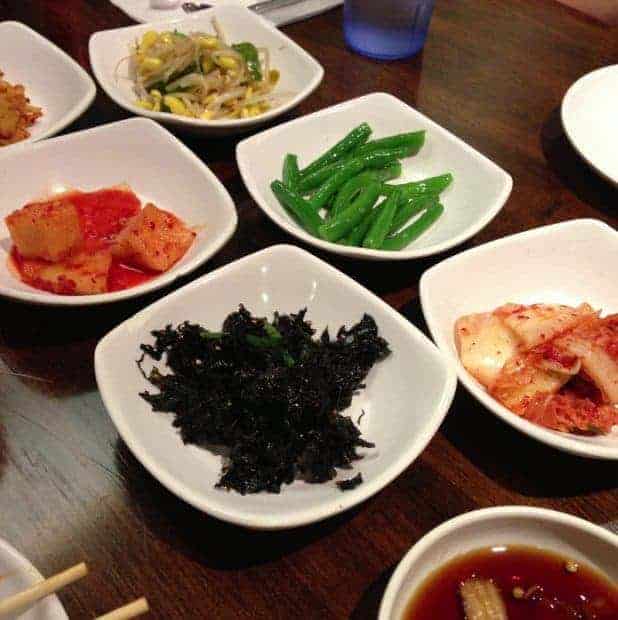 Kimchi (http://en.wikipedia.org/wiki/Kimchi) – Considered a cornerstone of the Korean diet, kimchi is a spicy, fermented napa cabbage, radish, scallion, or cucumber side dish. It’s sometimes hot and sometimes sour, and usually consists of brine, scallions, spices, ginger, chopped radish, garlic, shrimp and/or fish sauce. In its traditional incarnation, it’s not vegetarian, so please read labels if you are. Kimchi is not only a side dish for when you are eating other things like rice or noodles, it’s also an ingredient in many other dishes like bibimbap, pancakes, or meat with lettuce wraps. Koreans tend to eat it with everything. My friend recently was reminiscing about her childhood afternoons, off the bus from school, she’d enter her home and her mother would always have white rice with kimchi waiting for her as an after-school snack. Yum. I’m already getting hungry. My sister-in-law is my kimchi dealer. She makes it fresh and spicy. My mouth starts to water when I open the jar.

Pickles are a subset of kimchi really. Spicy cucumber pickles and cucumber pickle salad are popular side dishes in Korea. This is a great quick and easy recipe. http://www.thekitchn.com/recipe-spicy-korean-cucumber-salad-oi-muchim-recipes-from-the-kitchn-173293

Japchae (http://en.wikipedia.org/wiki/Japchae) – I’m biased here because I love japchae and my sister-in-law makes it perfectly with the right balance of sour, salty, and sweet. Japchae noodles are not rice noodles. Rice noodles when cooked are white. The noodles used in japchae are cellophane or starch noodles, these particular ones made from sweet potato starch. They’re glassy and clear when cooked. Then for japchae they are stir fried with a sauce made from soy sauce, sesame oil, sugar, pepper, and sesame seeds. My SIL always makes them vegetarian but you can make them with beef like this recipe: http://www.maangchi.com/recipe/japchae

Spicy Ramen (http://en.wikipedia.org/wiki/Ramen#Outside_Japan) – Actually, in Korean, ramen is called ramyeon, and if you’ve ever watched ANY K-dramas then you would know that ramyeon is a central part of any Korean diet. It’s great hangover food, and unlike its Japanese counterpart, Korean ramyeon is usually spicy, laced with kimchi, and often comes with egg, dumplings, or … yes, cheese. I know. My SIL swears it’s good. She even puts cheese in the Korean version of sushi, kimbap. Anyway, lots of roadside stands in Seoul sell spicy ramyeon to drunk people late into the night. It can’t be beat.

Meat/Bulgogi (http://en.wikipedia.org/wiki/Bulgogi) – I’m proud of myself for even knowing what bulgogi is since I haven’t had meat in 15 years. This is the Korean barbecue that everyone raves over. There are dozens of Korean BBQ places in Manhattan and it’s possible there may be some in your local city. This dish is a do-it-yourself type of meal. You get a plate of excellent variety uncooked and marinated beef, vegetables, and then grill it right at your table. Combine the cooked meat with vegetables, kimchi, chili sauce, and wrap it in a lettuce leaf to eat. Follow it with some rice and soju and you’re all set for a very filling meal. These meals are the best for a large group of people. It’s definitely a social event. 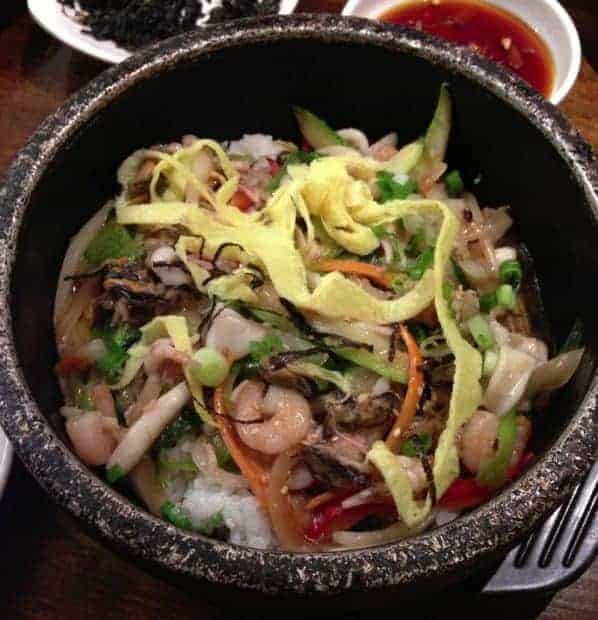 Bibimbap (http://en.wikipedia.org/wiki/Bibimbap) – One of my favorites, bibimbap is the epitome of a filling, hearty meal. Bibimbap means “mixed rice.” The ingredients, rice, seasoned vegetables, and chili paste, are usually served in a hot, stone bowl. Common additions include beef or seafood and a raw or fried egg. When the bowl is set in front of you, you take a metal spoon and mix the ingredients in the hot bowl which cooks them even more and crisps the rice that lies directly on the bowl. Add kimchi and pickles too, of course, and eat the whole thing, if you can. I like mine with mushrooms and seaweed too. There’s a fancy Korean restaurant in Manhattan called Hangawi I like to go to that makes the best stone-bowl rice. The waiters usually mix it for you right at the table.

Mandu (http://en.wikipedia.org/wiki/Mandu_%28dumpling%29) – Everyone has favorite dumplings, and the Korean dumplings, called mandu, are no exception. I like them a lot even if they take second standing to Japanese dumplings, gyoza. I don’t eat a lot of them because vegetable mandu without meat are harder to find, but they are very popular in Korean meals. Usually filled with minced meat, tofu, green onions, garlic and ginger, they are served with a sweet, salty, vinegary soy sauce for dipping. Oh, and kimchi, of course. Mandu make a great starter or side dish or eat them on their own for a quick lunch.

These items I’ve outlined are just the basics of Korean food and largely the most popular items. But once you’ve had these and enjoy them, you can expand and try newer items on the menu of your favorite Korean place. Korean cuisine is well-known for its hot pot meals, spicy soups, and seafood too. There’s plenty of variety to enjoy for years worth of dining! 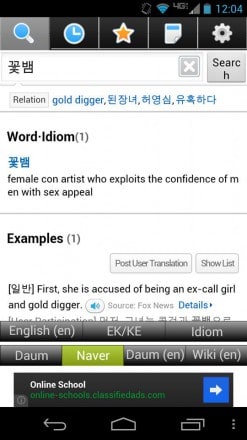 I included a lot less foreign language in FACE TIME than I did in my Nogiku Series novels. The extent of Korean language is mostly relegated to place names, food, and basic greetings that Laura learns in her Korean class.

But there's a scene near the end where I use the term “gold digger” in Korean. It's important to note that Korean-Americans here in the U.S. know the meaning of gold digger, and maybe even use the term literally in Korean (there is a translation “one who digs gold” 금광 찾는 사람 but it is not the idiom). My awesome Korean sister-in-law taught me that the term gold digger in the Korean dictionary directly translates to (do not click on this link if you are afraid of snakes like I am :( ) “Kkotbaem 꽃뱀”, a flowery snake. I love idioms, especially foreign ones that make no sense to me at all! When Laura hears “gold” and immediately infers “gold digger”, this is a falsity on my part for the sake of fiction. Hopefully no one is offended by my stretch of the imagination.

Another thing, Laura uses “choe sang hamnida” at the funeral near the end of the book, and this is less formal than it should be. This phrase “I'm sorry” is not really used at funerals, and instead a much more formal apology like “eukam ibnida” would be a better choice if you knew more Korean than Laura did. She only knew the basics which, as far as Lee is concerned since he didn't expect her to say anything at all, is fine in this instance. Foreigners rarely nail proper politeness when it comes to Asian languages like Korean and Japanese. I remember when I was taking Japanese on a regular basis, we didn't even get to increased levels of politeness until Level 8 or 9. It's a hard thing to learn! 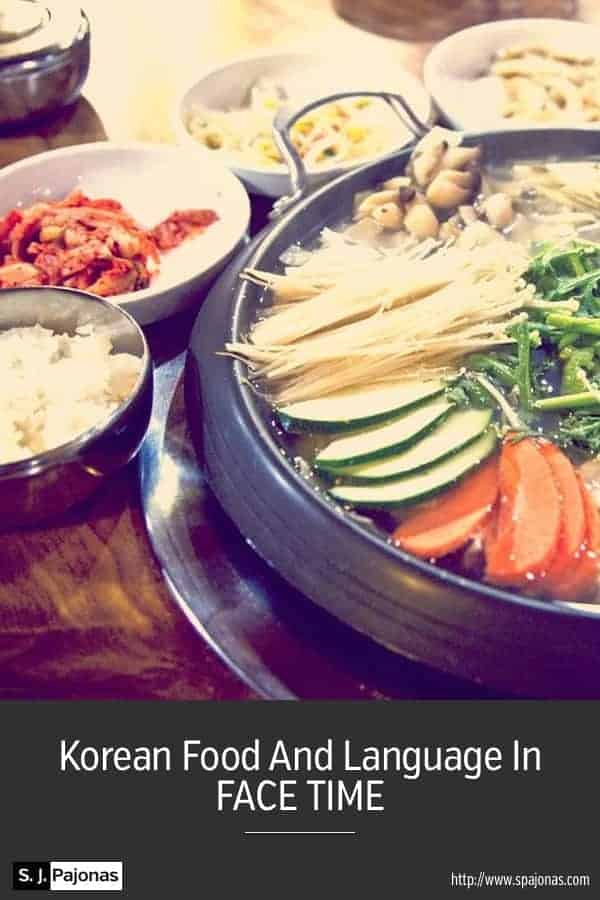