Have you guys all seen EVOLUTION: ANGEL, the first book in the new superheroes series from S.A. Huchton? I've promoted and reviewed her other series The Endure Series (MAVEN, NEMESIS, and PROGENY) which I loved, so maybe you remember her. She writes in the same sort of time-space that I do, New Adult Science Fiction Romance, so we've become colleagues :) This new series sounds really cool, and EVOLUTION: ANGEL is next up on my brand-new Paperwhite Kindle to read. Starla is on her book tour now, and I asked her to stop by today and tell me about her favorite superpowers. Let's hear what she had to say!

Hmm. That metaphor got away from me a bit, but I think you know what I’m saying. No matter what superpower you get, it’s still a superpower. So… basically awesome. However, each superpower also comes with a superdrawback. Let’s make a little list and you can decide for yourself which blessing/curse combo you’d opt for.

1. Superstrength! It’s fairly standard as far as superheroes go. It makes moving furniture and parallel parking much easier, and really comes in handy when there’s a villain about that needs his face smashed in. But, what would it be like to have that power for real? For one, attempting anything that requires a light touch would be right out. No fine art and antique restoration for you. It would probably make cooking meals a pain too. I’d likely spend 90% of my time cleaning up the crushed cans and jars and eggshells from the kitchen floor because I’d just break stuff all the time. So while this one’s awesome in cases of rescuing building collapse victims and beating up thugs, it’s probably not very useful for everyday life.

2. Superspeed! Never be late for anything ever again! Gotta get your kids to school in 2 minutes? BOOM. Done. Need something from the store you forgot? It’s yours in seconds. Boss informs you there’s a big meeting in 30 seconds and you’ve had to use the bathroom for HOURS? So not a problem. However, while all of that is fine and good, that’s kind of like owning a supersonic car but still having to work around the rest of the world that’s traveling at 50 mph. You’d either develop the patience of a saint or a serious case of road rage. I’m already at my wits’ end trying to get my kids out of the house on any given day. If I had superspeed, I’d probably go bonkers.

3. Telepathy! You’d never have to wonder if someone was lying to you ever again. While parents have had this ability in regards to their kids for millennia, imagine having that power with anyone. You’d know when that car salesman can make a lower offer, and you’d know that your neighbor has no intention of ever returning your incredibly expensive leather-bound collector’s edition of The Lord of the Rings complete with hand-drawn maps and author’s notes. You’ll know exactly when people are up to no good. Then again, you’d also know exactly what people think of you, and personally, I have approximately ZERO desire to hear the real thoughts of hetero dudes I pass on the street or know when the chick next to me is wondering if anyone’s looking so she can fix her really uncomfortable wedgie. There’s something to be said for a certain amount of ignorance, and while telepathy might come in handy at times, it’s probably more hassle than it’s worth, especially if you have no way to turn it off.

5. Pyrokinesis! Here’s a superpower that flat out looks amazing. You’d be the hit of any party for sure. You’d probably never have to worry about getting attacked on the street, either, because with a single thought, you can turn your enemies to ash. Conversely, though, it might be hard to make friends when a hug or handshake can result in first degree burns. And, really, how useful is this one unless you’re fighting crime or waging war every day of your life? Could come in handy in the kitchen. Once you got that whole control thing down, you’d be a master of creme brulee.

6. Atmospheric Manipulation! As a kid, you could potentially have unlimited snow days if you have the power to control the weather. Conversely, as a parent, no more snow days EVAR. Parts of the world hit hard by drought could pay you bucketloads of money to provide relief to parched landscapes as you direct the rains from flood-drenched areas to the places that need the water desperately. Sounds awesome, but what if you get a little too road-ragey one day and your slip-up with your temper causes lightning to strike that minivan taking the kids to soccer practice? And what if getting a little too caught up in an amorous moment could level a small town with a tornado? You’d basically have to live your life with no extremes in emotion. Sounds kind of boring, but it’s either that or wipe out life as we know it forever.

7. Time Travel! Oh goodness. No. I see no good coming of messing with the space-time continuum. Even going back thirty seconds can change the course of the human race! You don’t know what could happen! Do not mess with this. Leave it to the Doctor who understands this “fixed point” business. I prefer the universe not unravel because someone got a hankering for a bottle of Orbitz (Google it) and wound up triggering a nuclear war by accident. I suppose if you went forward in time knowing you’d be going back and doing whatever and looking to see if you changed anything major, you might be able to get away with it, but that seems like a LOT of work just to get a drink of something that wasn’t really all that tasty in the 90s anyway.

I could probably keep going on and on here (I have written three whole books about people with superpowers, LOL), but I think you can see where this is headed. While any superpower is supercool on the surface, I think when it came down to it, I’d probably pass on having one for real. That whole “with great power comes great responsibility” thing would probably be more than I can handle, and the world would end up with a supervillain on its hands instead. So, really, you’re welcome for me not having a superpower. LOL

More About the Book 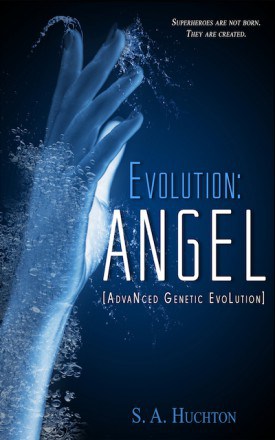 Candace Bristol has always been obsessed with comic books, but in a world where the nightly news often mirrors these inked stories, her dreams of becoming a real superhero could actually come true. After being rescued by members of the government’s AdvaNced Genetic EvoLution (ANGEL) Project four years ago, getting recruited for this elite team is all she's wanted.

Now 18, she's finally reached her goal after years of study and physical training, but little could have prepared her for life as a genetic experiment. As though coming to terms with her new ability to manipulate water isn't tough enough, she never expected to be swept off her feet by one of her fellow recruits.

With genetic alteration, the threat of physical and mental instability hangs over every superhero like a shadow. When one of their own tumbles over the edge of madness, Candace will have to choose between protecting the world, and saving the one who holds her heart. 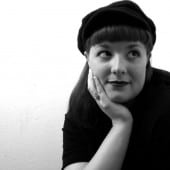 A geek of all trades, Starla Huchton has been crafting stories in various genres since 2007. Her first novel, THE DREAMER'S THREAD was released as a full cast audiobook podcast, becoming a double-nominee and finalist for the 2010 Parsec Awards. After releasing short fiction of steampunk, noir fantasy, and other varieties, she released the first three books of the Sci-Fi Romance ENDURE series in 2013. All three books of the EVOLUTION series will be released in 2014, as well as a Steampunk Fantasy novel, MASTER OF MYTH (the Antigone's Wrath series, book 1), which was the first place winner of the Crested Butte Writers' contest, The Sandy, in 2012.

When not writing, Starla trains three Minions, a black lab, and a military husband whilst designing book covers for independent authors and publishers at designedbystarla.com.