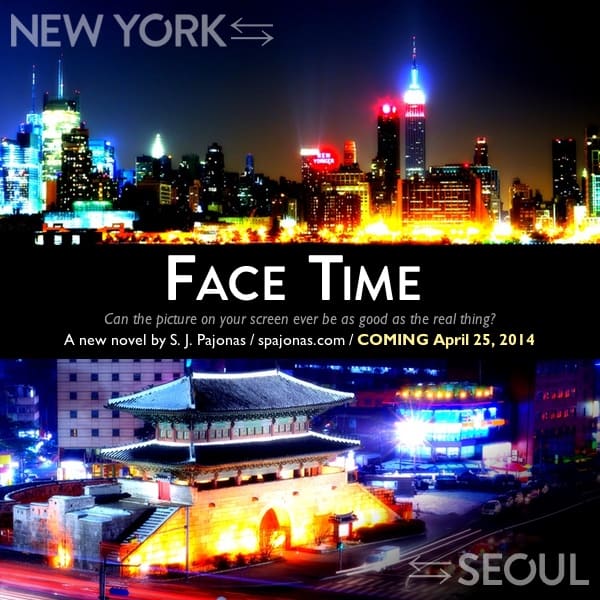 A little less than a year ago, I got a great idea for a novel outside of the Nogiku Series. Something totally different. Something contemporary which was a genre that I never thought that I would write in. I have a lot of online relationships because I have friends all over the world. These are people that I text with, skype or FaceTime with, email with, twitter with, blog with, Flickr with. And many of these relationships have been going on for almost 10 years. Some of these people I have never even met in the flesh! I know lots of people who think that's crazy, but I can assure you that in my corner of the internet, this is all de rigeur.

I have a good friend, Sharon, who is in the military and so is her husband. Last year, her husband went on tour overseas in the Middle East. She was pregnant, and it was a really hard time for them all to be separated. She often posted screenshots of her FaceTime conversations with her husband, and I loved every single one of them. It was sweet that they were talking as often as they could, and they used this amazing technology to do it. Yes, those FaceTime commercials are not just playing with your heartstrings. It really does connect people.

Then I thought, what would it be like to date over FaceTime? To really get to know someone without being able to touch them or see them other than through a device. FaceTime is the one-word variation of the phrase “face time” which means “time spent interacting in the presence of or in the same location as another or others.” Real face time means being with another person. And so my idea was born!

This novel combines many of my favorite themes: love, family, mistakes made and how to forgive those mistakes, getting over and making up for regrets, and Asian cultures and families. This time I chose a Korean-American family and all that comes with Koreans who moved here to the US to make a life after the Korean War, they're own struggles, and how they impact their kids.

But first and foremost, this novel is a romance. It's about two very different people, getting to know each other, learning to compromise, and falling in love.

FACE TIME will be available on April 25, 2014. The cover reveal will be on February 13, 2014 (Sign-up here!) I'm very excited about the cover! It was designed by Carrie Butler at Forward Authority who I enjoyed working with immensely.

After the best first date ever, Lee thought Laura was funny, intelligent, and impulsive; a whirlwind of bright laughter and happiness. Laura loved Lee's sweet smile and the way he expertly filled in every awkward pause. He held her hand and then pulled her in for the most perfect kiss she’s had in years. What could possibly be wrong? Just the 7000 miles that separates them the next day.

Even though Lee has gone home to Seoul, Laura can't stop thinking about him. What starts as an innocent text thanking him for their dinner date becomes something much more: someone either of them can't live without. But Laura's got a live-in mother going through a midlife crisis, and Lee's stressful traveling schedule means they'll be apart for some time. Life, family, and a complicated past also get in the way, and they're both going to need actual face time to figure it out.

Told from both Lee and Laura’s point of view, FACE TIME is a funny, romantic, modern-day story about two people who connect across the world.