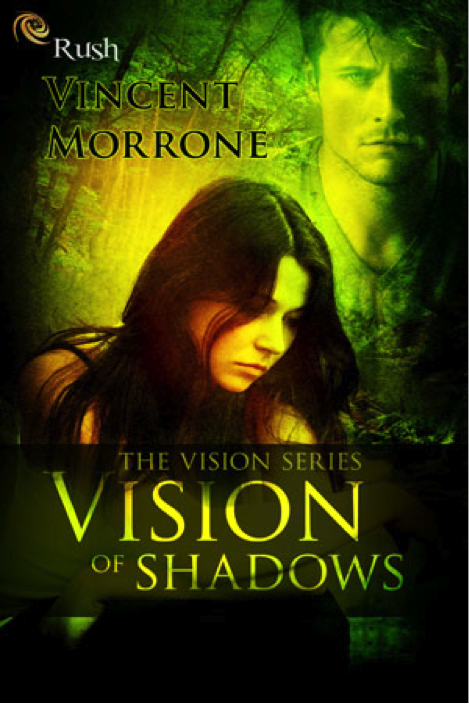 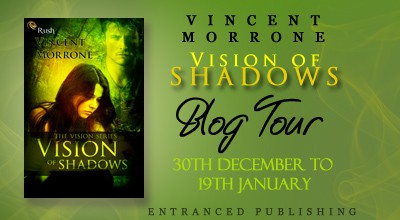 Welcome readers to the VISION OF SHADOWS blog tour! Vincent Morrone is a fellow New Adult author and an avid member of the New Adult writing community that I belong to. We have often shared some laughs and talked about what has inspired VISION OF SHADOWS and its dark subject matters. He's a fun and fantastic guy so I asked him to provide his top ten list of villains. I love what he had to say!

10. Diana – From V – She was smoking hot and cold blooded. Literally. Here was a woman that could have you for dinner. Or lunch or even breakfast.

9. General Zod – The Superman movies – You know you’ve got a great bad guy from the original when they chose to bring him back for the reboot. I loved Man of Steel, but my heart belongs to the Christopher Reed movie and Terence Stamp.

8. The Joker – Batman – He’s the ultimate bat-bad guy. He was in the campy TV show, played by Cesar Romero. He was brought to life for the big screen by the legendary Jack Nicholson and then again by the later Heath Ledger. And did you know that the character was voiced by Mark Hamill for the animated series? That’s right, Luke Skywalker became the Joker. (Talk about going to the dark side!) Speaking of…

7. Darth Vader from Star Wars – I can still remember as a kid, seeing the formidable menace stalking across the screen, choking people with the force. Okay, I admit I thought it was kind of lame how a guy who hunted down and murdered nearly all Jedi, including the kids at Jedi academy, blew up an entire planet without blinking an eye (At least we assume he didn’t blink an eye behind that helmet.) and yet he goes and saves one person, his own son, and the great mystical force forgives him and he gets to hang out in the afterlife with one of his victims. Obi-Wan. But still, it’s Darth Vader!

6. Khan! (Khan! Khan! Khan!) From Star Trek – Mr. Roarke gone bad. Loved him in the original space seed. Adored him in Star Trek II: The Wrath of Kahn. And he even worked in the reboot!

5. Lex Luthor – Superman – How many Luthors have there been? Too many that I don’t feel like tracking ‘em all down. And so many of them were fabulous. But I’ve got to single out Michael Rosenbaum from Smallville.

4. Hannibal Lector – The TV show was okay, but let’s be real here: it was Anthony Hopkins that made it so we can’t look at fava beans the same way ever again.

3. Voldemort – Otherwise known as He Who Shall Not Be Named. I don’t get him. If I was a powerful dark wizard, I’d use my abilities to give myself hair, not change my appearance to be more snake like and have no hair.

2. The Borg – Star Trek: The Next Generation – I still remember throwing things at the TV with the season 3 cliffhanger where they had assimilated Captain Jean Luc Picard. I’m a huge zombie fan, so naturally the best Trek bad guy has to be the cybernetic zombies that take away your humanity. 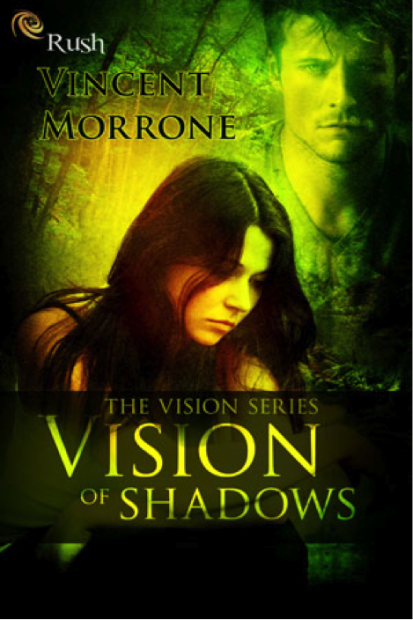 Is Bristol Blackburn about to meet the love of her life…or her killer?

After the death of her parents, Bristol Blackburn's life is thrown into chaos and she's forced to move to Spirit, a small town where shadows are stirring. As she learns to navigate her new school and figures out how to keep her psychic abilities secret from her family, Bristol comes face to face with the boy who makes a regular appearance in her dreams: the gorgeous, possibly deadly, Payne McKnight. Soon she’ll find out if Payne will be the love of her life, or the end of it — and she has no idea which possibility scares her more.

And that's not even the worst of it. Strange shadows are haunting her dreams, and they're up to something that could put Bristol and the lives of everyone she loves in jeopardy.

Check out the prequel to VISION OF SHADOWS, VISION OF SECRETS.
On Goodreads: https://www.goodreads.com/book/show/18190594-vision-of-secrets 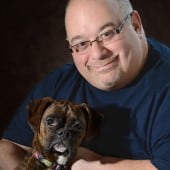 Born and raised in Brooklyn NY, Vincent Morrone now resides in Upstate NY with his wife. (Although he can still speak fluent Brooklynese.) His twin daughters remain not only his biggest fans, but usually are the first to read all of his work. Their home is run and operated for the comfort and convenience of their dogs.

Vincent has been writing fiction, poetry and song lyrics for as long as he can remember, most of which involve magical misfits, paranormal prodigies and even on occasion superheroes and their sidekicks.

Vincent also participates in a group blog called YA Rush which consist of YA and NA Entranced authors. You can find YA Rush here:
Website: http://yarush.com/