NEMESIS Was The Book I Couldn’t Put Down 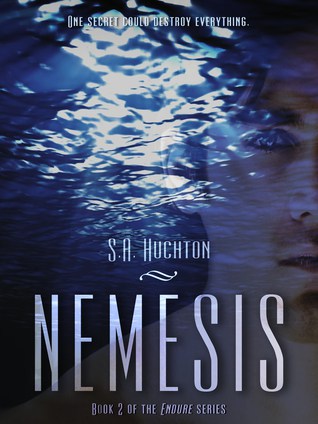 This happens to me all the time. I read the first book in a series and LOVE IT, to the point that I stalk the author's website and Goodreads waiting for the second book to come out. Then the day the second book is available, it's in my hands thanks to the wonders of modern technology, and I read it too fast! NEMESIS did this to me. It left me in a pile of repentant goo, the house a mess because I couldn't stop reading to clean it, the children barely fed because going into the kitchen meant I had to put the book down.

NEMESIS, Book 2 of the Endure Series, is the follow-up book to MAVEN. This series appeals to me because it's in the same genre as REMOVED (my debut on Amazon), New Adult Science Fiction Romance. If you've read REMOVED and want something even steamier with great characters, a unique setting, and a hell of a mystery, then you should definitely pick up MAVEN then NEMESIS. Lydia is a smart and capable heroine. She has her flaws but they only make you want to root for her more. Daniel is a handsome, trying-to-reform playboy, the kind of guy you find funny and attractive all at once but want to slap him for being a stupid guy.

There was one scene in NEMESIS (no spoilers!) where I swear the author, S.A. Huchton, was channeling every wrong thing a guy could ever say straight out of Daniel's mouth. It was brilliant and believable. I wanted to give her a high five. I wanted to jump into the book and high five Lydia for the way  she handled it. I'm always grateful when I meet a heroine in a story who says the right things at the right time even if they get her in more trouble. I absolutely hate when I read a book and the characters do totally stupid things in order to further a plotline. That never happens in Huchton's books, though you may want to kill Lydia by the end of NEMESIS (no spoilers!) Just sayin'.

All in all, I can't recommend this series highly enough. The mystery is mind-boggling, the sex is steamy, and I'm sure you won't be able to put it down. NEMESIS is a truly strong follow-up to MAVEN. Read them both!

Daniel's face softened and he crouched in front of her. “Hey, it's only been a few weeks since we started working on this. Don't be so hard on yourself. No one expected you to cure even one of the bacteria in the first month, let alone all four.”

She met the gaze of his hazel eyes. The warmth and concern seeped into her, chasing away some of the cold defeat. “I'm trying, Daniel. It's just… It's difficult when I know you and the rest of the team are working so hard and making real, visible progress while I'm sitting here with nothing but a bunch of infected phytoplankton and no way to cure them. We haven't had so much as a single cell succumb to any of our experiments. Nothing is working.”

He took her hand and leaned up to kiss her forehead. “So don't think about it any more tonight, okay? Let's go grab dinner. Doesn't Tony have a mid shift tonight? The whole gang's sure to be around. I think the non-science company will do you some good.”

Lydia knew he was probably right, but didn't want to admit it.

“Well?” He stood and held out his hand.

When she took it, instead of leading her out the door, Daniel pulled her close. His kiss was a reminder of how much she had been missing him lately. He was working almost constantly there days.

When he broke away, Lydia gave him a coy smile. “Sure you don't want to skip dinner and go right for dessert?”

That's just a little taste of the smart AND sexy NEMESIS has to offer!